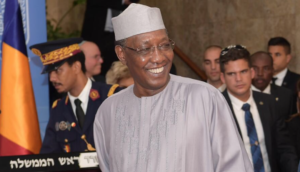 “I announced yesterday that we will renew the diplomatic relations between Chad and Israel in the coming weeks,” Deby told i24NEWS.

In his remarks yesterday, Deby emphasized that renewing relations with Israel does not mean neglecting the Palestinian cause.

In response to i24NEWS asked why his visit to the region did not include meetings in Ramallah, Deby replied:

“I am a former soldier and I fought I wars. I know the price of war. I don’t wish it on any people in any country,” he said.

“We came here this time with an exact plan because we have not had diplomatic relations with Israel since 1972 and the aim was to renew these relations. We have no problem with Abbas or the Palestinians, he is our friends and participated in all the African union committees,” he added.

Jerusalem has expressed strong interest in furthering its diplomatic relations with countries normally at diplomatic odds with Israel.

“The President of Chad invited me to visit Chad, and I gladly accepted. Israel is in an unprecedented political boom. It works on all continents, including in the Arab world – and there will be other countries. You’ll hear about it,” Israeli Prime Minister Benjamin Netanyahu said following his meeting with Deby.

And indeed, top officials in Jerusalem are saying that more diplomatic breakthroughs are currently in the works, one of them reportedly with the gulf kingdom of Bahrain and potentially Sudan.

President of Chad in exclusive interview with i24NEWS – Photo: i24NEWS

“The world is changing before our eyes. Crises and wars we knew are changing as well. We don’t wish them on today’s generation or future generations. There’s a time for war and a time for peace. our message is global to all leaders; Chad doesn’t presume to speak for black Africa. Chad comes to renew bilateral diplomatic relations. But if Chad can be a facilitator, Chad will not hesitate,” Deby said.

While there are many different sets of interests involved – from security, through aerial routes to support in international forums – for Israeli prime minister Benjamin Netanyahu there’s a lifetime mission he is now slowly but steadily fulfilling— proving that Israel can become a world power – despite… or maybe even because.. Of regional politics.

The Chadian president’s visit is part of a larger plan for Netanyahu to strategically ally Israel so that it can become a world power, despite or maybe even because of regional politics.