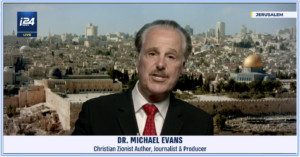 When asked why Gulf leaders seem to be more open to Israel today, the Evangelical leader said Netanyahu’s “anti-terror technology for peace” was part of the reason for that.

Dr. Michael Evans talks US peace plan, Saudi Arabia on Daily Dose
(on computer: right click on photo→ Open video in new page/tab)
Praising both US President Donald Trump and Netanyahu, Dr. Evans said: “You have two leaders now that never existed in Israel’s history; Netanyahu and Trump. No (Israeli) Prime Minister has ever had this relationship with an American President.”

Israeli Arabs, however, are happy living in Israel, according to Dr. Evans. “They have homes, they have jobs. There is not a terror problem (with Israeli Arabs) because they have a better life,” Dr. Evans concluded.