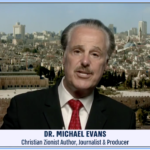 When asked why Gulf leaders seem to be more open to Israel today, the Evangelical leader said Netanyahu’s “anti-terror technology for peace” was part of the reason for that. Continue Reading »