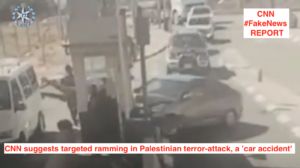 CNN consistently suggests a false narrative in its reporting of Palestinian terrorism to demonize Israel. – Such blatant, continued, misrepresention of events, gives merit to claims that CNN is #FakeNews.

Controversial? See the video [below] and judge for yourself.

Check out the video of the incident and this is what you’ll see: a car being driven by Ahmad Moustafa Erekat approaches a checkpoint in Abu Dis, near Jerusalem. He abruptly accelerates and turns toward a group of police. His car then rams into a female officer — who is knocked into the air — before colliding with a booth and coming to a stop.

The attacker stopped, aimed, and sped at the border officers while ignoring their warnings. He then swiftly exited the vehicle, possibly in a bid to attack other soldiers. No doubt about it: Ahmad Erekat, nephew of senior Palestinian official Saeb Erekat, was caught on tape attempting to perpetrate a clear act of violence.

Note how Erekat slowly maneuvered his car to give it more room before quickly accelerating into the checkpoint tower. This video testimony clearly contradicts the assertion by members of Erekat’s family that he was simply rushing to pick up his sister and mother ahead of a family wedding later that evening, and lost control of the vehicle. No, Erekat’s actions were intentional.

Yet CNN’s headline emphasizes the Israeli response – ‘man being shot’ – though most of the video documenting the incident is of Erekat attempting to ram his car. A bit misleading, no?

Was the Suspect Really a Threat, Or Were Israeli Forces Trigger-Happy?

The final seconds of the 12-second clip shows Ahmad Erekat getting out of the car, and an officer shooting him. His figure exiting the car was blurred before the video’s release to the public, making it impossible to tell whether he presented a threat or if he had his hands in the air as he was shot dead.

Someone reading this piece could easily conclude that the incident was a one-off, and that Israel Border Police officers may well have overreacted to a harried young man rushing to a wedding – with tragic consequences. What’s missing here is any sense of historical context. In fact, Israeli security forces have become all too familiar with the pattern of a suspect ramming a car, exiting it, and then proceeding to stab at people.

Since 2015, there have been over 80 vehicular (ramming) attacks in Israel. In April, a member of Hamas was suspected of engaging in a car-ramming attack at the Abu Dis checkpoint. The suspect, Ibrahim Halassa, 25, then stabbed and moderately injured an Israeli officer before being shot and killed. According to counter-terrorism expert Daveed Gartenstein-Ross, terrorists began using vehicles as weapons partly because, “the security barrier is fairly effective, which makes it hard to get bombs into the country.”

By rushing out of the car immediately after ramming his car, Erekat gave the soldiers a strong indication that he intended to continue his attack by trying to stab someone else in the vicinity. As such, the Border Police officers on the scene had no choice but to act as swiftly as they did.

CNN then cites Alistair Burt, a former UK minister with responsibility for the Middle East. Before the video was released, Burt was troubled by the prospect that Erekat’s death was “needless.” But even after the footage was released Burt doesn’t condemn Erekat’s actions, defaulting to a vague plea for an end to all violence:

There will be no consensus on this, just as there rarely is in the deaths of many. I have spoken for many years about the agony of young Israelis and Palestinians, who instead of growing up together confront each other across barbed wire and wall. This is no future for them.

For a bit more clarity on the issue,  some thoughts from former Israeli Ambassador to the United Nations Ron Prosor are illuminating. Ambassador Prosor wrote a letter to the UN in response to yet another car ramming attack, during which a Palestinian attacker intentionally plowed his car into three IDF soldiers. Here’s an excerpt:

While Hamas rushed to praise today’s attack, the international community has yet to even address the attacks from earlier this week. I have not heard any condemnation of this terror attack, or the previous attacks, from the Security Council.

As I have written to you previously, terror is terror, no matter where it takes place, or who is harmed. The people of Israel deserve the same level of concern and empathy as any other people in the world.

By referring to the actions of Israel Border Police officers as ‘controversial,’ CNN crosses a journalistic red line from reporting to advocacy. And by failing to provide proper historical context of the car ramming epidemic in Israel, the network makes it all too easy to conclude that the incident in question may have been unjustified.

Palestinian incitement for vehicular attacks against Israelis is often used in their media.

Don’t CNN readers deserve to be given the facts, and then be allowed to reach their own conclusions without being hampered by agenda-driven journalism?

Actually, most of the video is of a Palestinian man ramming his car into Israeli soldiers. Why the misleading headline, @CNN? pic.twitter.com/VUKKZGairt

Gidon Ben-Zvi, former Jerusalem Correspondent for The Algemeiner newspaper, is an accomplished writer who left Hollywood for Jerusalem in 2009. He and his wife are raising their four children to speak fluent English – with an Israeli accent.

Ben-Zvi’s work has appeared in The Jerusalem Post, The Times of Israel, The Algemeiner, American Thinker, The Jewish Journal, Israel Hayom, and United with Israel.

HonestReporting monitors the news for bias, inaccuracy, or other breach of journalistic standards in coverage of the Arab-Israeli conflict. It also facilitates accurate reporting for foreign journalists covering the region.

HonestReporting is not aligned with any government or political party or movement.