CNN’s incendiary accusation against Israel piles assumptions on top of assumptions. It relies not so much on objective, incontrovertible evidence, but on the feelings of biased eyewitnesses. All the while, plausible alternative explanations are not only cast aside, but effectively covered up by CNN’s reporting.

These are the acts of a partisan organization, not a serious news agency.

Below are just some of the major shortcomings of the CNN investigation.

CNN relies on Robert Maher, professor of electrical and computer engineering at Montana State University and who specializes in forensic audio analysis, to suggest that the gunfire that killed Abu Akleh originated at a distance “between 177 and 197 meters.” This, CNN goes on to claim, “corresponds almost exactly with the Israeli sniper’s position.”

CNN presents Maher’s analysis without including the important assumptions and caveats that Maher provided elsewhere. For example, in a separate interview with Bellingcat, Maher explained some of the ways this analysis could be wrong:

“Maher added a note of caution and caveats to these calculations. ‘The estimate of the distance depends upon the air temperature, since this affects the speed of sound,’ he said.

“While the calibre of bullet analysed is also consistent with reports that the bullet which killed Abu Akleh was 5.56mm, it is also important to note that this calculation does not account for the possibility that another weapon not visible or captured in videos from the scene could have been used.

Nowhere, in either the CNN article or the TV segment, were these important qualifications provided.

Moreover, there are important questions that CNN never addresses. For example, the article states: “The video that Maher analyzed captures two volleys of gunfire; eyewitnesses say Abu Akleh was hit in the second barrage….” Did Maher also provide an analysis of the gunfire from the first barrage? If so, was it consistent with his analysis of the second barrage? This is important information left out of CNN’s reporting that would help clarify whether there may or may not have been gunfire from a different source.

This is particularly important considering a claim in the TV segment where CNN states that Palestinian gunmen were “without a clear line of fire” towards Abu Akleh. At no point does CNN explain what would have obscured their line of fire. A map used by CNN places Palestinian gunman south of the Israeli soldiers on the same, largely straight road which both the Israeli soldiers and Abu Akleh were also on. While it is certainly possible that changes in elevation or other obstacles could have obscured the line of fire from the Palestinian position, CNN simply does not provide the details necessary to support or challenge the claim. 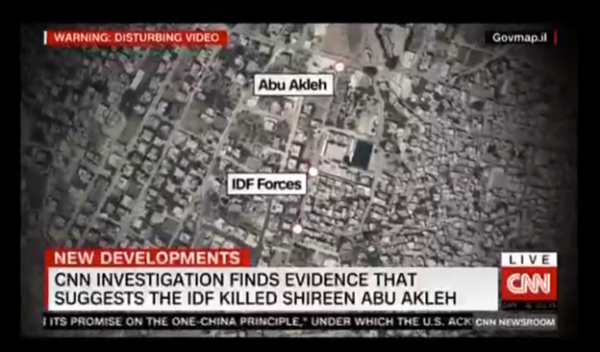 A screenshot of the map used during the CNN story showing the positions of Abu Akleh, the IDF forces, and Palestinian gunmen.

In addition to asserting that the Palestinian gunmen south of the Israelis did not have a clear line of fire, CNN also claims they would have been “beyond the 200-meter reach of the gunfire.”

Realize what CNN is doing here. They leave out the important qualifications Maher made elsewhere, that the estimate of 177-197 meters was based on numerous assumptions, and the fire could very easily have been from a shorter or longer distance if any of those assumptions did not hold. After failing to inform its audience of this, CNN then states definitively that Palestinian gunmen more than 200 meters away “were too far from Abu Akleh to have fired the fatal shot, according to a firearms expert.” This is only true if every single assumption Maher made turns out to be correct, but none of which have yet been proven.

By failing to inform viewers and readers of the important assumptions and caveats of Maher’s analysis, and by failing to support its conclusions (such as with Palestinian lines of fire) CNN uses broad strokes to prematurely rule out very plausible alternative explanations.

CNN’s report also relies on an expert by the name of Chris Cobb-Smith. Cobb-Smith claims that there was “no chance” random fire could result in the “tight configuration” of the shots that hit a tree next to where Abu Akleh died. As CNN relays to readers:

“’The number of strike marks on the tree where Shireen was standing proves this wasn’t a random shot, she was targeted,’ Cobb-Smith told CNN, adding that, in sharp contrast, the majority of gunfire from Palestinians captured on camera that day were ‘random sprays.’”

So how can Cobb-Smith make this definitive claim?

Now consider Cobb-Smith’s background, which at no point is provided by CNN.

Far from being an impartial expert, Cobb-Smith is from the notoriously partisan organization Forensic Architecture. His organization has openly advocated anti-Israel political positions that have nothing to do with forensics, such as promoting the Boycott, Divestment and Sanctions movement against Israel.

It’s also the organization that absurdly claimed Israel unlawfully shot a Palestinian man, Ahmed Erekat, when he rammed a car into an Israeli soldier in 2020, notwithstanding the clear video of the incident. An individual from an organization willing to go to such absurd, partisan lengths to accuse Israel of acting unlawfully can hardly be considered an impartial “expert.” Yet that is exactly how CNN presents him.

CNN failed to provide context on the individuals it was relying on elsewhere, too.

Take Shatha Hanaysha. She has a known history of publicly celebrating terrorist rocket attacks on Israel and “[w]however sacrifices his life for the sake of the homeland.” Hanaysha publicly celebrated the murder of 17-year-old Israeli girl Rina Schnerb, tweeting: “Maybe this attack would become a model to follow, which would make ‘recreational hikes’ in the hills and plains of West Bank, an adventure of undesirable consequences” (as translated by CAMERA Arabic). 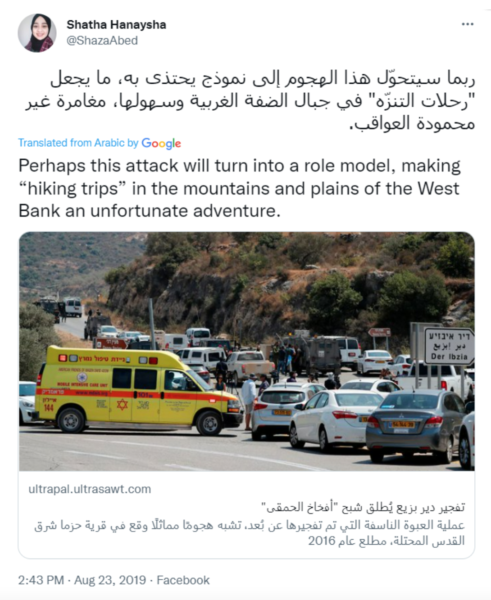 In 2018, Hanaysha seemed particularly fond of the terrorist murder of Rabbi Raziel Shevach, tweeting (among other posts): “22 bullets in only 40 seconds within a range of 20 meters,” followed by a smile emoji and the hashtag “#NablusOperation.” She would go on to tweet repeatedly about the “martyr AhmadJarrar”—the terrorist who killed Rabbi Shevach.

True, even a broken clock is right occasionally, and someone who celebrates the murder of teenage girls can tell a truth once in a while. So what evidence did Hanaysha bring to the table for CNN?  Feelings.

Consider this exchange, in which CNN uses her to attempt to establish their the main claim that the IDF deliberately targeted Abu Akleh:

In other words, CNN relied on her mind reading powers and her feelings. Hanaysha was 200 meters (656 feet) from the IDF soldiers, according to CNN itself. Even assuming those shots were fired by them, what evidentiary value is provided by Hanaysha’s claims that she “thinks” they wanted to kill Abu Akleh?

Consider the other main exchange between a CNN interviewer and Hanaysha:

CNN: “The Israeli government has said that there were also Palestinian gunmen in that area, and that–”

CNN: “–it could have been either. You were there. What did you see?”

Hanaysha: “I absolutely disagree that there is any Palestinian guy with his gun. And as a journalist, and as a human, I will not put myself in a dangerous situation.”

Hanaysha is blatantly lying. Even the CNN segment contains video of Palestinian gunmen firing in the area—CNN’s own map even shows a location where Palestinian gunmen were captured on video firing at Israeli soldiers. Yet CNN never confronts Hanaysha with the evidence the network had available that directly contradicted her emotional testimony.

Another prominent witness is Jamal Huwail. Like Hanaysha, Huwail is known for glorifying terrorism, including a stabbing attack that killed four Israelis just two months ago.

Huwail is used in the article for two claims. First, according to CNN, Huwail “believed the shots were coming from one of the Israeli vehicles….” Then, quoting Huwail directly: “They were shooting directly at the journalists.”

There’s a big problem with this. Nowhere does CNN state where Huwail was at the time Abu Akleh was killed. CNN tells us where he was earlier in the day (“at the Awdeh roundabout”—down the road from where Abu Akleh was later killed) when he was chatting with Abu Akleh, but then states, “The next time he saw her up close, she was dead.”

If Huwail saw Abu Akleh earlier in the day at a different location, and the only time he saw her again afterwards was after she was already dead, how does he know the shots came from the Israeli vehicles, and that they were shooting directly at the journalists?

Relying solely on CNN’s own reporting, there’s no reason to think he would be in any position to make such a claim.

Whether relying on Hanaysha or Huwail, much of the “evidence” of the IDF “targeting” Abu Akleh seems to rely on people who were 200 meters (or, in the case of Huwail, perhaps much further) away from the soldiers and yet seem to believe they know exactly what the Israeli soldiers were seeing and what was going through their minds at the time.

Consider just the fact that at no point does CNN even establish that the Israeli soldiers knew there were journalists down the road, let alone intentionally shot at them.

The evidence it uses for these propositions boils down to mainly the feelings of two obviously partisan witnesses who were 200 meters (or more) away from the soldiers. Barring the existence of psionic abilities, their statements are useless for actual evidentiary purposes. Instead, they serve only to stir up emotions.

The only other evidence used by CNN to suggest Abu Akleh was “targeted” is the “analysis” by the partisan Cobb-Smith who fails to adequately explain how he can rule out the source of fire being from Palestinian gunmen.

But, as seems increasingly clear, CNN isn’t actually interested in honesty when it comes to Israel. 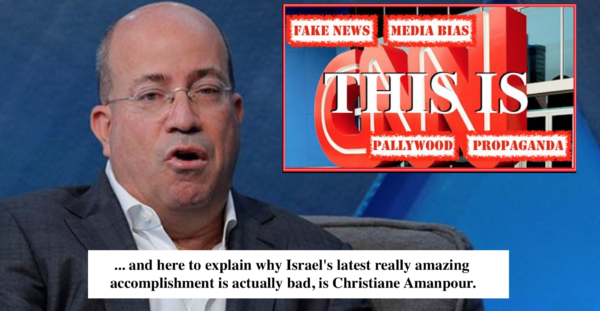 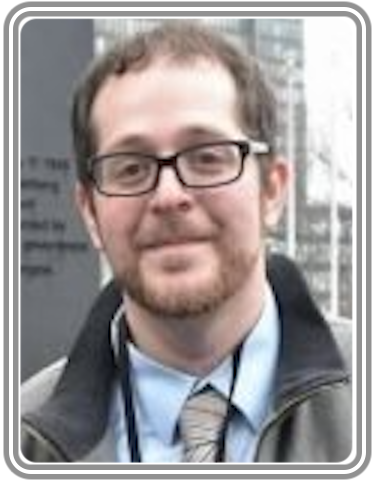 David M. Litman is a media and education research analyst at the Committee for Accuracy in Middle East Reporting and Analysis (CAMERA).

What we do know so far…

We also know that IDF training and IDF’s Rules of Engagement require all Israeli security personnel to fire ‘semi-automatic’… meaning one bullet fired each time the trigger is pulled. Another requirement is a shot is ONLY PERMITTED when the ‘target’ is clearly seen via the sights of the weapon.

Neither of these IDF Rules are practiced by the Palestinian combatants, as seen in this screenshot of fighting when Abu Akleh was killed. 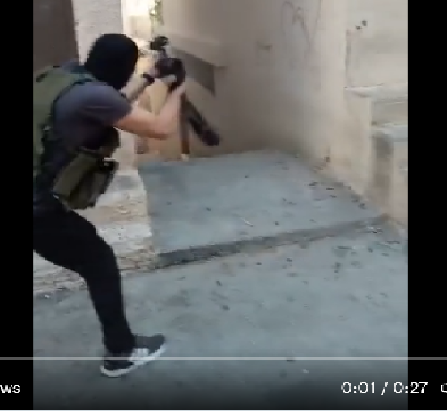 During clashes with the IDF, when Al Jazeera reporter Shireen Abu Akleh was killed, a Palestinian is filmed firing in ‘automatic’ bursts around a corner, without aiming his weapon on a specific target. – Screenshoot taken at .15 seconds into the video posted above.

Also notice on the ground, in front of the shooter, are about 30 empty bullet shells, attesting to his firing of the weapon in ‘automatic’ mode.