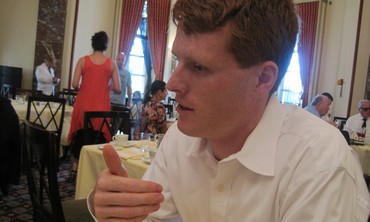 The history of the Jewish people, Israel’s situation and that of the region is complicated and nuanced, Kennedy told The Jerusalem Post in an exclusive interview.

But within that complexity, one simple point stood out, he said.

“This is a nation that is asking for nothing more than the ability to be recognized and for people to acknowledge their right to exist,” Kennedy said.

His visit marked the second time the fledgling representative has visited Israel and the Palestinian territories.

Kennedy came on a private trip prior to his election to Congress in November 2012, as the representative for the 4th District in Massachusetts, a seat previously held for 32 years by veteran politician Barney Frank.

He is the third generation in his family to work on Capitol Hill. His grandfather Robert Kennedy, the brother of former US president John F. Kennedy, was a senator from New York. His father, also named Joseph, was a representative for the 8th District in Massachusetts.

On a personal level, Kennedy said, he connected to Israel as the land of the Bible and the place where Jesus walked. It was amazing, he said, to visit sites he grew up reading about in Church. 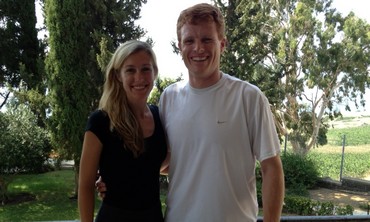 US Rep. Joseph P. Kennedy III with his wife Lauren at the Mount of the Beatitudes.

As a member of the House Committee on Foreign Affairs and the representative of a district with a heavy Jewish constituency, Israel and the Middle East also play an important role for Kennedy politically.

Among the issues he played close attention to before this visit is Iran’s nuclear program. At the end of July, he was among those who supported a bill in the House of Representatives for additional sanctions against Iran.

When he spoke with the Post on Wednesday in Jerusalem at the start of his trip, he explained that a nuclear Iran would generate a regional nuclear arms race that could include countries such as Saudi Arabia, Egypt and Iraq precisely at a time of profound instability in the region.

“Adding nuclear weapons to the mix,” he said, “does not make the challenges [of this region] any easier.”

He added, “The best measure is prevention.”

He said that he understood why Israel was concerned, in light of Iran’s repeated existential threats against it.

But he said that Israel could trust US President Barack Obama on Iran. The president has repeatedly made a commitment to stop Iran from obtaining nuclear weapons, Kennedy said.

He added that the Congress was also committed to halt Iran’s nuclear weapons program.

“I think you have seen a commitment by members of the congress that recognize [that] a nuclear-armed Iran in the most volatile region of the world is not going to make the world a more peaceful place,” Kennedy said.

Iran’s President Hassan Rouhani, who was elected in June and took office on August 3, presented a renewed opportunity for a diplomatic solution, Kennedy said.

But he added that he was mindful of the fact that Rouhani was still responsible to Iran’s supreme leader Ayatollah Khamenei.

If the new Iranian regime would commit to peace, it would find a willing partner in the US, he said.

But if it continues with its policy of proliferation and with threats to eradicate the State of Israel, Kennedy said, “then that it is not any sort of change at all.”

Turning to the renewed peace process, facilitated by US Secretary of State John Kerry, Kennedy said he was hopeful that progress could be made.

“I do not think anyone has any illusions about the difficult task ahead,” Kennedy said. But in order to move forward, both Israeli and Palestinian leaders need to be talking to each other, he said.

“No one doubts the challenge of trying to achieve a long-lasting peace in the long run,” Kennedy said.

“Hopefully, we will build to a place where that is possible… because I do believe that is what both peoples want,” Kennedy said.

He added that solving the Israeli-Palestinian conflict was important for regional stability.

“It won’t solve every problem, but certainly if we are able to make real progress with this conflict, it will have a stabilizing effect [on the region],” Kennedy said.