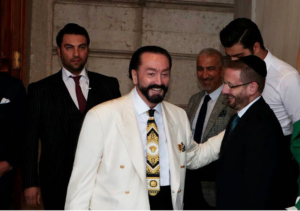 Mr. Adnan Oktar, prominent Muslim opinion leader from Turkey, welcomed a delegation of rabbis and politicians from Israel for the iftardinner he hosted in Istanbul on June 22, 2016. Rabbi Dov Lipman, a top officer from the World Zionist Organization, was among those attending the dinner, along with many Muslim, Jewish and Christian representatives. Following his visit to Istanbul, Rabbi Lipman noted that he was very pleased with the friendship and goodwill blessings he received in Turkey, and the previous negative image about Turkey in his mind had completely changed.

Mr. Oktar’s guests from Israel also appeared on his live program on the A9 television channel, and applauded Mr. Oktar’s unwavering efforts to end anti-Jewish sentiment in Turkey. The program saw important statements on relations between Israel and Turkey, peace in the region and the world, and in particular on the friendship between Muslims and Jews.

Mr. Adnan Oktar explained that the days when the Prophet Solomon’s Masjid and Palace (Solomon’s Temple) will be rebuilt in an atmosphere of global peace and tranquility are at hand. Rabbi Ben Abrahamson, who is a historian and consultant to the Sanhedrin regarding issues related to Islam, emphasized that the rebuilding of the Temple is a very good development for all mankind.

Mr. Oktar said that Muslims, Jews and Christians share many common values and the current opposition was a ploy of satan. He said people of reason who are full of love should come together and enourage peace and love.

When Mr. Adnan Oktar was asked what should be done to dispel the tension between Muslims and Jews, he urged the Israeli and Turkish governments to be more courageous, and not be influenced by loveless articles published in the media or be concerned with loss of votes.