The Israel Cancer Association both congratulated MKs on Wednesday for increasing the types of places where smoking will be prohibited, and expressed disappointment that the legislation had been watered down. 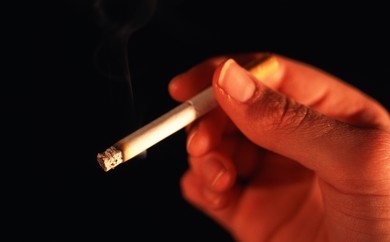 The amendment to no-smoking laws, approved by the Knesset’s Labor, Social Affairs and Health Committee and implemented by order, makes it illegal to light up cigarettes and other tobacco products at outdoor performances; within 10 meters of entrances to hospitals and clinics; or in bus and train stations, swimming pools, indoor stadiums, outdoor wedding locations, swimming pools, public shelters; and in other outdoor locations.

In addition, it will prohibited to light up anywhere inside synagogues, churches and mosques, old-age homes, cultural centers, vehicles used for teaching people to drive, and in central bus stations except for completely separate smoking rooms, if they have been set aside. Those areas where smoking is still allowed will have to be designated as such with signs.

Smoking in stairways and passages in these buildings is also prohibited.

The committee said that the amount of space allocated in restaurants and cafes as smoking areas is “much too big” and that the new order restricts this to 15 square meters. In wedding and other event halls, no more than 25 percent of the sitting space may be set aside for smokers.

This rule was objected to, without success, by Shai Berman, chairman of the Restaurants, Cafes and Bars Association.

The Health Ministry said it intends to prohibit smoking completely in the workplace, since “smoking rooms” and filtering systems do not prevent smoke from being breathed in by nonsmokers.

But the ICA said the committee did not add to list other important outdoor locations such as stadiums, amphitheaters and courtyards of community centers and youth movement facilities.

ICA spokeswoman Edna Peleg said that in view of the decrease in the age of smokers, it is very important to limit smoking in public places where youths spend a lot of time. The changes will be implemented 30 days after the order is published in the official Reshumot state gazette.

Deputy Health Minister Ya’acov Litzman and his director-general Prof. Ronni Gamzu said the ministry would do all it can to prevent people from being exposed to tobacco smoke in public places. But Gamzu objected to smoking outside places frequented by youth, saying: “You should have protected these children!” The committee-approved order is based on recommendations by a public committee to reduce the amount of smoking – but it was weakened, apparently due to lobbyists’ pressures on the legislators.

The order also did not prohibit actors in theaters to smoke as part of plays and other performances.

A Tel Aviv University study published recently in a prominent medical journal and reported this week by The Jerusalem Post found that the vast majority of Israelis support the enforcement of smoking prohibitions both indoors, such as in pubs and bars, and in numerous outdoor locations. Dr. Leah Rosen of the university’s School for Public Health in the Sackler Medical Faculty studied the views of 505 Israeli men and women, who compromised a representative sample of the country.

Amos Hausner, head of the Israel Council for the Prevention of Smoking, commented on the order that the rest of the civilized world is increasingly outlawing “smoking rooms” because the smoke reaches others through air-conditioning pipes. “The bill was watered down significantly, even though the original recommendation was modest to start with according to international standards,” he said.