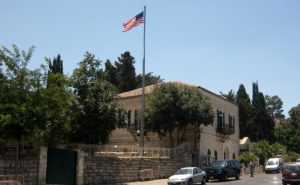 The New York Times and Wall Street Journal quoted US officials on record, who said the State Department plans to reconfigure an existing consular facility that the US has operated out of Arnona in West Jerusalem since 1948.

Announcing the controversial move last month, US President Donald Trump said he planned on setting forth architects and planners to design a new facility. And his secretary of state, Rex Tillerson, has told reporters that a formal move would be at least three years off.

But Trump and his son-in-law, Jared Kushner, who is leading the administration’s peace push, have since favored an expedited timetable, the Times reported. Tillerson continues to favor a longer timeframe.

“The secretary’s primary focus is on security,” said Steve Goldstein, undersecretary of state for diplomacy and public affairs, according to the Journal report. “We will not be moving to a new facility.”

The US building girds the Green Line, which served as Israel’s border before the 1967 war.

“We are going to retrofit a building” for a 2019 opening, he continued. “There is no plan for anything temporary.”

The Palestinian Authority has ceased formal communication with the Trump administration since the Jerusalem decision.