Dershowitz: ‘The Obama legacy will go into the dustbin of history’ 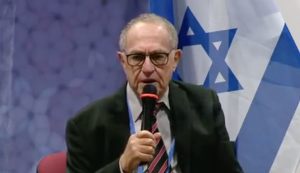 WATCH: Prof. Alan Dershowitz, a longtime Democrat and once Obama supporter,  comes out with a scathing criticism of Obama’s conduct vis-a-vis Israel, the US’s closest ally in the mid-East.

Prominent author and Harvard Professor Emeritus of Law Alan Dershowitz sharply criticized President Barack Obama in an interview with the Israel Hayom newspaper on Friday, saying he believes “Obama will join Jimmy Carter as somebody who will always stand against Israel, but who will be tossed into the dustbin of history when it comes to the Middle East.”

Dershowitz said he believes once U.S. President-elect Donald Trump takes office on January 20, there would be nothing left of the hostility of the current administration toward Israel.

“I don’t think it will have a big impact any more than Jimmy Carter’s hatred to Israel had an impact on American policy,” he said.

Dershowitz, who had been a longtime Democrat and Obama supporter, blasted Obama for allowing the passing of the UN Security Council resolution condemning the settlement enterprise in Judea and Samaria.

“I was not surprised [that Obama allowed the resolution to pass], but I was disappointed because President Obama personally promised me in the Oval Office that he would never abandon Israel and that he had Israel’s back,” he told Israel Hayom, adding, “I didn’t realize that what he meant by having Israel’s back is that he would aim a knife at it and stab Israel in the back. And the resolution is simply stupid. That is the best word I can come up with.”

Dershowitz pointed out that the resolution is supposed to be about “settlement expansion” in Judea and Samaria, “but the text of the resolution stupidly includes all the Jewish holy sites from the Kotel to Mount Scopus to the Jewish Quarter, and that was just an unnecessary provocation. I don’t know whether that was just revenge by an outgoing president against Israel or whether he didn’t realize that it covered the Kotel where he himself ‘illegally’ prayed. If that area is illegal, why was he praying there? I don’t know whether this was stupidity or maliciousness or just bad policy, but there is no excuse for the text of this resolution.”

At the same time, Dershowitz said Obama’s recent conduct would not have a lasting effect on America’s relationship with Israel.

“[The relationship] is based on American support; it is very deep. We don’t know too much about what incoming president Trump’s views are; he has expressed very strong views toward Israel and has appointed an ambassador with equally strong views, but only time will tell,” he added.

Despite being critical in the past of Israel’s presence in Judea and Samaria, Dershowitz acknowledged, “Nobody is moving out of Maaleh Adumim or Gilo, and so I think land swaps to preserve them as part of Israel are essential, but that must be subject to bilateral negotiations, not the UN. The UN shouldn’t be allowed to come close to the Israel-Palestine conflict, because every time they do they make peace more difficult to achieve.”

By allowing the UN resolution to pass, Obama “stabbed Israel in the back,” reiterated Dershowitz.

Dershowitz called on the U.S. to take action against the United Nations in response to the resolution.

“Look what happened when Saudi Arabia threatened to cut off funding. When Saudi Arabia threatened to cut off funding when they were being put on a blacklist for abusing children, they simply went to Ban Ki-moon and said, unless you take us off the blacklist we will cut off funding. And Ban Ki-moon took them off the blacklist. That is a model for what the United States should do at the UN They should threaten to cut off all funding until or unless this resolution is rescinded, and let’s see how the UN responds to that. I think Israel should count on its friends in the United States and Congress, in the Senate, and now in the White House coming on Jan. 20 to fight this battle for them at the UN Israel at the UN today does not have the ability to conduct a fair fight.”

As for the possibility of the resolution leading lawsuits against Israelis at the International Criminal Court (ICC), which Palestinian Authority officials have already threatened to file, Dershowitz pointed out that the ICC “has no jurisdiction over Israel.”

“In a democratic world,” he pointed out, “you have to consent, and Israel has never consented to the jurisdiction of the ICC. If the ICC ever were to go against Israelis, it would be doing more damage to the ICC than to Israel. And I would make myself available to any Israeli who is brought before the ICC. We will put together the best legal team in history to oppose this tyranny using the law as a vehicle of tyranny.”