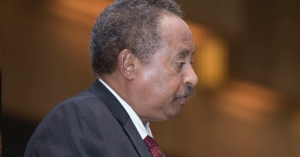 He then added, ambiguously, that “Nonetheless, we remain committed to moving towards achieving the goals of the transitional period and to overcoming all challenges.”

Conflicting responses have been emerging out of Sudan since the general’s meeting with Netanyahu on Monday.

Earlier Wednesday, Sudan’s government spokesperson and Minister Faisal Mohamed Saleh said that the meeting was a “violation of the Sudanese constitution” and reiterated his government’s support of the Palestinian cause.

In addition, the government of Sudan claimed on Monday evening that it did not have advanced knowledge of the contentious meeting.

However, Lebanese daily Al Akhbar reported that some of the Council members knew of the plan to meet the Israeli premier, among them Prime Minister Hamdok, despite claiming a day prior that he knew nothing about it.

Al Akhbar further reported that the meeting was organized by three Arab countries in close relations with Sudan: The United Arab Emirates, Egypt and Saudi Arabia.

REMEMBER Sudan??…the home of the infamous “3 No’s”: “no peace with Israel, no recognition of Israel, no negotiations with Israel”?

Losing patience with the corrupt Palestinian leadership, yet another Muslim country is putting their national interests ahead of the never-ending Palestinian intransigence in making peace with Israel.

So… Why would any country want to set aside their political support for the never-ending Palestinian ‘struggle’, and finally focus of their national interests?