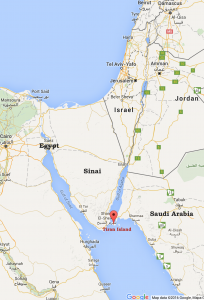 “The Aqaba Gulf constitutes our Egyptian territorial waters. Under no circumstance will we allow the Israeli flag to pass through the Aqaba Gulf. The Jews threatened war. We tell them: Ahlan Wa-sahlan [You are welcome], we are ready for war. Our armed forces and all our people are ready for war, but under no circumstance will we abandon any of our rights. This water is ours.” 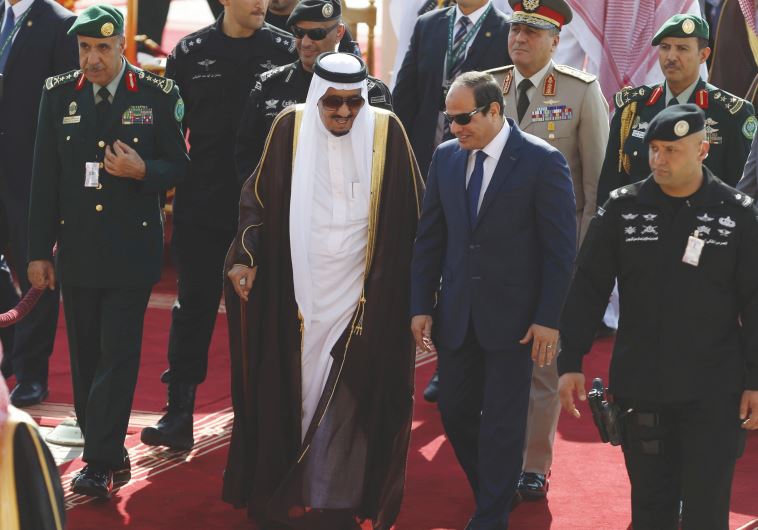 Thus, according to Michael Oren in his book Six Days of War, spoke Egyptian president Gamal Abdul Nasser about the Straits of Tiran on May 22, 1967, to a group of Egyptian pilots at the Abu Suweir air base near the Suez Canal. The next day Nasser closed the straits to Israeli shipping, creating the casus belli for the Six Day War.

Following a meeting between President Abdel-Fattah al-Sisi and King Salman in the historic Abdeen Palace in Cairo, a meeting during which the Saudis agreed to set up a $16 billion investment fund in Egypt and to give the Egyptian economy an injection of a few billion dollars more through trade and investment agreements, Cairo announced that it agreed to demarcate its maritime borders with Saudi Arabia, agreeing to transfer control of the two islands at the mouth of the Gulf of Aqaba, Tiran and Sanafir, to Saudi control.

Or, in a reversal of Nasser’s words, the water is no longer theirs. Rather, if the deal is passed by the Egyptian parliament, which is just a formality, control of the islands that stand sentry over the Red Sea waterway leading to Eilat will – at least formally – be under the control of Saudi Arabia.

This is the country that will now control the choke points to Israel’s main waterway to Africa and Asia, and – in an indication of the shifting Mideast tides – Israel raised nary an eyebrow in concern.

Hanegbi said that the Saudis are committed to freedom of shipping under international law. “We have an interest in expanding the cooperation in the Sunni axis, which is struggling against the radical axis headed by Iran,” said Hanegbi.

“The more the Saudis, and the Gulf states in general, connect to the countries with which we are at peace and create with them a strategic front against ISIS [Islamic State], Iran, Hezbollah, against all the players that are our actual enemies, ultimately the effect will be unifying and not weakening.”

And Ya’alon did not seem in any way unhinged by the move, telling reporters during a briefing that the agreement was reached between four parties – Saudi Arabia, Egypt, Israel and the US – to transfer responsibility for the islands, “on condition that the Saudis fill the Egyptians’ shoes in the military appendix of the peace agreements.”

That military appendix of the 1979 Egypt-Israel peace agreement divides the Sinai Peninsula into four zones, with Tiran and Sanafir designated as part of Zone C, areas where only the Multinational Force and Observers and Egyptian civil police equipped with light weapons can go. And because of the islands’ strategic sensitivity, and the fact that they are part of the peace agreements between Egypt and Israel, the transfer of at least formal sovereignty to Saudi Arabia – Egypt will apparently retain military control of the islands for another 65 years – could not be done without Israel’s involvement.

ISRAEL – CIRCA 1960 A stamp printed in Israel, shows a Israeli warship in the Straits of Tiran, circa 1960

Following the announcement of the deal, Saudi Arabia’s Foreign Minister Adel al-Jubeir said his country would abide by the “agreements and commitments that Egypt has agreed to regarding these islands,” though this would be done “without having a relationship or communication with Israel.”

But officials in Jerusalem said it was clear to all that the deal was the result of quiet talks between four parties: Egypt, Saudi Arabia, Israel and the United States, And even though this does not mean that the Foreign Ministry’s director-general Dore Gold sat down in a room and discussed the matter with his Saudi counterpart, it is obvious that without messages being passed back and forth, the deal would not have been culminated.

Which raises an interesting question: If the two countries could reach understandings on this issue, might it now pave the way for other understandings on other issues? For months, even years, Prime Minister Benjamin Netanyahu has been speaking of an unprecedented confluence of interests between Israel and many of the Sunni countries in the region, and hinting at discreet talks taking place between Israel and many countries with which it has no diplomatic relations, such as Saudi Arabia. This deal provided an “outing” of these types of interests and contacts.

The Brotherhood sees Egyptian-Saudi cooperation as harming its own rapidly fading designs for regional hegemony. And in this case, what is bad for the Muslim Brotherhood is very good for Israel.

But as much as the deal says about the under-the-radar relationship emerging between Israel and the Saudis, it says even more about Saudi Arabia’s growing relationship with Egypt, something that has enormous – and positive – ramifications for Israel.

The growing relationship between Saudi Arabia and Egypt, a relationship that – if current plans come to fruition – would be actualized by the building of a bridge between the Sinai and Arabian peninsulas which would physically link the two countries, is definitely in Israel’s interests, said Yitzhak Levanon, Israel’s ambassador to Cairo from 2009 to 2011.

It is good for the stability of the region,” said Levanon, who now lectures at IDC Herzliya. “And that is something that is surely in Israel’s interests.”

In Levanon’s telling, the Saudis apparently believe that certain issues are coming to a head in the Middle East: that the Iranian-backed Houthis are close to defeat in Yemen, and that the situation in Syria might be coming to a close. They are positioning themselves for a leadership role in the new Middle East, he said, and “understand that they need Egypt. It is the biggest country, with the strongest army and great influence.”

The only way for them to control the region, he said, is to do it “hand-in- hand with Egypt.”

And control of the Middle East is very much the big-picture struggle being waged throughout the region.

While some have divided this fight for hegemony into two competing camps, Sunnis vs Shi’ites, another analyst of the region, former deputy for foreign policy and international affairs at the National Security Council Eran Lerman, has a different take, and has said that there are four camps vying for control: Iran, Islamic State, the Muslim Brotherhood and what he called the regional forces for stability, a camp that includes – among others – Israel, Egypt, Saudi Arabia and Jordan.

The significance of the Saudi-Egyptian move, he said, has to do primarily with strengthening this final camp.

Lerman, who today is a faculty member at the Shalem Academic Center in Jerusalem and a fellow at the Begin-Sadat Center for Strategic Studies at Bar-Ilan University, said the transfer of the islands from Egypt to Saudi Arabia “is clearly part of a larger bargain to bind the two countries together. From our perspective, anything that helps Egyptian stability is good.”

This move helps Egyptian stability because in exchange the Egyptian economy will get a cash infusion of billions of dollars, he said. In addition, this will likely draw Egypt closer to Saudi Arabia’s position on Iran, which is much closer to Israel’s position on the matter.

The anger in Egypt that accompanied the announcement of the new demarcation of the maritime boundary, anger that emerged in the social media, was largely orchestrated by the Muslim Brotherhood, Lerman said, adding that this group suddenly positioned itself as the “guardians of Egyptian territorial integrity.” He noted that what angered the Brotherhood was less the transfer of the islands and more the economic intervention and security cooperation between Egypt and Saudi Arabia that the deal represents.

The Brotherhood sees Egyptian-Saudi cooperation as harming its own rapidly fading designs for regional hegemony. And in this case, what is bad for the Muslim Brotherhood is very good for Israel.