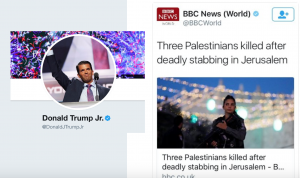 “You mean after they stabbed a female Israeli police officer to death… right? This is as close to being misleading as possible,” Trump Jr. wrote on Twitter, in an apparent defense of the security services.

The president’s son continued his Twitter postings on the same topic.

“Need a new term for this nonsense. Sort of the opposite of victim blaming. How about Culprit Coddling? Maybe Criminal Cozying? Thoughts???”

You mean after they stabbed a female Israeli police officer to death… right? This is as close to being misleading as possible. https://t.co/EWZPHiRemU

The BBC has previously been accused of anti-Israel bias. In response to critics, the British broadcaster compiled an internal report in 2004 over its coverage of the Israeli-Palestinian conflict.

After terror attacks, pro-Israel groups may criticize wire services for misleading headlines that focus on Palestinian casualties. Some of the headlines emphasize the assailant’s death, without contextualizing it as occurring during an attack.

❌ A female officer was stabbed to death in Jerusalem. To the BBC she is irrelevant because she is Israeli. BBC mourns ISIS terrorists’ death pic.twitter.com/jSBVMvlRMP

On the other hand, Palestinian advocates sometimes claim that Western media favors Israel, given that many foreign correspondents live in Israel and that some of their children enlist in the Israel Defense Forces.

The BBC has since changed the article’s headline. Britain’s Israeli embassy has requested an apology in addition to the change.