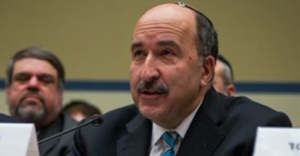 Dr. Dore Gold, president of the Jerusalem Center for Public Affairs and former Israeli ambassador the United Nations, addressed the U.S. House of Representatives Subcommittee on National Security on Wednesday under the title of “Moving the American Embassy to Jerusalem: Challenges and Opportunities.”

At the hearing, which was attended among others by former U.S. ambassador to the U.N. John Bolton and members of Congress from both parties, Gold intimated that Israel had no intention of ever conceding a united Jerusalem.

On the matter of moving the U.S. Embassy to Jerusalem from its current location in Tel Aviv, Gold said, “It is my view that President Donald Trump has made a commitment in that regard, and I believe he will stand by what he has said. The United States will evaluate the timing and circumstances for executing that decision in accordance with its interests.”

However, Gold said, “The act of moving the [U.S.] embassy is really a subset of a much larger issue, and that is finally recognizing a united Jerusalem as Israel’s capital,” Gold said.

The former Israeli ambassador explained that keeping the embassy in Tel Aviv presents political, diplomatic and cultural dangers and emboldens those in the Middle East who question the legitimacy of the Jewish state and view it as a temporary entity.

Jordanian soldier displaying Torah scrolls in the ruins of The Churva Synagogue in Jerusalem, after it was captured and subsequently blown up. 1948

Gold went on to present a historical review of Jerusalem’s modern history, saying that the U.N. Partition Plan, issued on Nov. 29, 1947, called for establishing an international entity around Jerusalem to be governed by the U.N. itself; but that the U.N. “did not lift a finger” when Arab armies’ assaulted the Old City in the ensuing 1948 war for Israel’s independence.

According to Gold, “The mounting attacks led to a mass exodus of the Jewish population of the Old City – what today would be called ‘ethnic cleansing.'”

Gold recounted the speech delivered at the time by Israel’s first prime minister, David Ben-Gurion, to the Knesset, about the U.N. proposal to internationalize Jerusalem:

Support the State of Israel, which has acted responsibly in protecting this legacy of humanity. Or, undercut Israel, by preferring arrangements for the holy city that plainly have not worked in the past and will undoubtedly fail in the future. There is a regional assault on holy sites underway across our region. Israel deserves your support as it defends Jerusalem.

“In other words,” according to Gold, “Israel still adhered to the rest of the resolution, but it could not give up parts of Jerusalem to international control.”

Gold also lambasted the Palestinians and their treatment of Jewish and Christian holy sites in the wake of the Oslo Accords.

“Guarantees were given to protect the holy sites, to assure free access to them, and to provide freedom of worship and practice,” he said. “The Interim Agreement was signed by the parties here in Washington, in the White House, and witnessed by the U.S., Russia, Egypt, Jordan, Norway and the [European Union], which added their signatures.

“How did this arrangement turn out? If the Interim Agreement was intended to provide a test run for the management of holy sites by the Palestinian leadership in a future final status agreement, it fell far short of what even the strongest advocates of the Oslo Accords had expected,” Gold said.

In April, 2002, during the Second Intifada, Gold reminded the committee that “13 armed Palestinians, from Hamas, Islamic Jihad, and Fatah Tanzim, forcibly entered the Church of the Nativity in Bethlehem – the birthplace of Jesus and one of the holiest sites for Christianity. The gunmen seized the Christian clergy as hostages, looted church valuables, and desecrated Bibles.”

Under the protection of the PA, Palestinian rioters set fire to the compound of the Tomb of Joseph in Nablus. – Photo: IDF Spokesperson’s Unit

He also noted the propaganda campaign being waged by the Northern Branch of the Islamic Movement in Israel, under the banner of “Al-Aqsa is in Danger.” The movement, an offshoot of the Muslim Brotherhood, was “inciting much of the Middle East with this lie,” he told the committee.

In summary, Gold said: “Whatever is finally decided on the embassy issue, states have a clear choice. They can support the State of Israel, which has acted responsibly in protecting this legacy of humanity. Or they can undercut Israel, by preferring arrangements for the holy city that plainly have not worked in the past and will undoubtedly fail in the future. There is a regional assault on holy sites underway across our region. Israel deserves your support as it defends Jerusalem. For only a free and democratic Israel will protect Jerusalem for all the great faiths.”