By YAAKOV LAPPIN
The IDF evacuated tourists from the top of Mount Hermon Wednesday afternoon, after sighting dozens of possibly armed Syrians approaching the border in the Golan Heights. 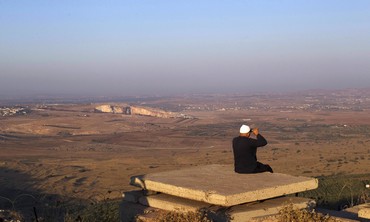 Druse resident looks out at Syria from the Golan -Photo: Ronen Zvulun/Reuters

The IDF said the suspects did not infiltrate the border into Israel. It was not clear whether they were armed.

The shells landed harmlessly in open fields, but exploded a short time after farmers were in the area.

The mortar shells were “aimed at villages inside Syria and are part of the internal, ongoing conflict in Syria,” said the IDF Spokesman’s Office following the incident.

The IDF also warned that “fire from Syria leaking into Israel will not be accepted.”

It was the second time in as many months that Syrian shells strayed across the border into Israel.

Israel filed a complaint at the time with the United Nations Disengagement Observer Force which operates along the border area.

Israel has prepared contingency plans over the possibility that violence in Syria, where rebels are fighting to overthrow Syrian President Bashar Assad, could reach Israeli territory.