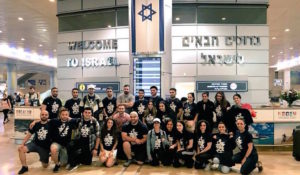 Twenty-three Eastern Christian millennials, Assyrians, Chaldeans and members of the Syriac Orthodox Church living in Canada and the US, have arrived in the Holy Land with the goal of strengthening their faith and connection to Israel.

“I was fascinated by it. I loved the passion where you’re taught that survival mentality and I see that very present in Israel today.”

EASTERN CHRISTIANS on their way to Passport Control at the airport to begin their trip to Israel with the Philos Project and Passages leadership course. – Both Photos: JULIANA TAIMOORAZY, Facebook

Mando, a member of the Assyrian Church of the East who was born and raised in Chicago, was on an organized trip to Israel last week with a group of Christians who have roots in the region.

The group was led by Juliana Taimoorazy, a senior fellow at the Philos Project and president of the Iraqi Christian Relief Council. It included young Christian leaders from the US and Canada, many of whose families have left Iraq over the last four decades to escape terrorism and persecution.

Taimoorazy, who led a similar trip last year, said the feeling among the group was that they were not just seeing religious pilgrimage sites and learning about the history of Israel, but also bonding with Israelis.

“We went to a family for Shabbat and they were welcoming and listened to our stories. And we understood some of their prayers and language. We felt at home,” she said. “My personal mission when it comes to Jewish- Christian relations is to build a strong bridge between Assyrians and Jews.”

There are several groups of Eastern Christians from Iraq, Syria and the region, including Assyrians, Chaldeans and members of the Syriac Orthodox Church. Altogether, there are several million members of these churches, but their numbers have declined greatly in the areas to which they are indigenous. Many live in the diaspora, including some 400,000 in the US.

Some cities, such as Kirkuk in northern Iraq, have seen many Christians move abroad since the 1970s. What began as a trickle under Saddam Hussein became a deluge after 2003, when terrorists targeted churches. When Islamic State arrived in 2014, it expelled all the Christians from Nineveh plains.

Scott Phillips, executive director of Passages, an organization that brings Christian college students to Israel with the goal of strengthening their faith and connection to Israel, assisted in bringing Taimoorazy’s group.

He said his group works with partners on more than 80 campuses in the US and has initiatives for Eastern Christians as well as African-American and Hispanics to participate in leadership courses in Israel.

“Creating connections between Eastern Christians and the Jewish people is exciting to me. Here we have two groups of people trying to maintain their ancient language and culture in their ancient homeland against incredible odds,” said Robert Nicholson, founder of the Philos Project, a New York-based non-profit organization promoting “positive Christian engagement in the Middle East.”

This year’s trip included a stop at Masada and the Galilee, where the group sang in Aramaic. The young Christian leaders also visited Yad Vashem. Walking through the Holocaust Remembrance Center, they were reminded of persecution experienced by Christians in the region over the years, such as the Armenian Genocide.

Taimoorazy said the success of the Jewish state is a source of inspiration for Christians who have fled Iraq in recent years and long to return to their native lands. “We look at Jews as a symbol of hope.”

Taimoorazy has traveled to Iraq to help local Christians rebuild their communities, which were damaged during the war to liberate them from ISIS.

Coming on the heels of the clashes in the Gaza Strip and the US Embassy move to Jerusalem, the group experienced some of the most recent controversies in Israel.

Mando was particularly struck by speaking with a member of the IDF.

Another attendee, Amanda, is on her second trip to Israel. “It’s challenging and growing,” she said.

“I’m not here for just a one-sided experience,” she continued, adding that the recent crisis in the Gaza Strip has helped her understand the conflict and inspired her to be a peacemaker.