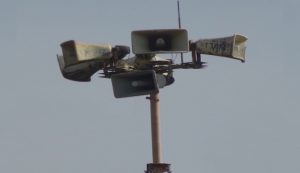 The Egyptians have a ‘muezzin bill’ debate of their very own: a dispute has broken out over the past day after Egypt’s Minister of Religious Endowments legislated to ban the use of loudspeakers by mosques during Taraweeh prayers – a special prayer only recited during the Muslim festival of Ramadan that is read following the fifth prayer of the day.

The new provision has led to widespread national anger at the same time that a Christian student was accepted to study Dentistry at the Islamic Al-Azhar University. In addition, a dispute has erupted after the Egyptian Ministry of Religious Endowments granted permission to a Coptic Christian journalist to renovate a mosque in his town – in what has been termed an “unprecedented move.”

The minister, Mokhtar Gomaa, defended his ministry’s decision to ban the use of external loudspeakers by mosques during the Taraweeh prayers and emphasized that it was an “organizational decision.” According to Gomaa, “the ban on loudspeakers has been introduced in order to prevent disorder when all the voices of the imams become mixed up into each other, and so that the students will be able to concentrate on the readings.”

Gomaa emphasized that “loudspeakers will be authorized when a mosque has insufficient capacity for all the prayer-goers, who will therefore need to pray outside.”

In response to the ban, the Dar al-Ifta, Egypt’s official religious institution tasked with drafting edicts, stated, “religious leaders have emphasized the need for loudspeakers so that those praying will be able to hear and follow the prayers. The call to prayer is also included in this law.”

The Egyptian parliament has also entered the debate. Members of the Egyptian Committee on Religion failed to reach consensus, with some describing the provision as important so that the loudspeakers will not be a nuisance, and others emphasizing the symbolic nature of the prayer during Ramadan.

In November 2016, the Israeli Knesset Ministerial Committee for Legislation authorized a loudspeakers bill which would force mosques to silence their loudspeakers. The bill must pass four readings in the Knesset before it can become law.