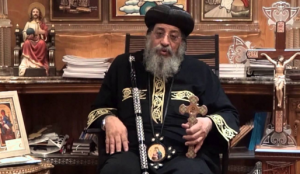 The Egyptian head of the Coptic Church, Pope Tawadros II, made a rare visit to Jerusalem to preside over the funeral on Saturday of a Coptic bishop.

The previous Coptic pope, Shenouda III, banned worshipers from traveling to Jerusalem more than three decades ago, despite a 1979 peace treaty between Egypt and Israel. Since his death in 2012, Egyptian Copts have increasingly been seen on pilgrimages to Jerusalem.

Speaking outside the Church of the Holy Sepulcher, revered as the burial place of Jesus, Tawadros said his trip was personal, and church officials said it was not political.