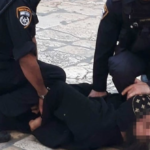 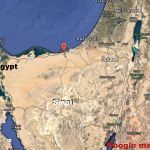 After decades of boycott, Egyptian Copts now flock to Israel in the thousands

The visit by Egypt’s Coptic Pope Tawadros II, who went to Jerusalem for the funeral of the Holy Land’s Coptic Archbishop Abraham, was taken as a sign that the late Coptic Pope Shenouda III’s travel-ban was rescinded.

Thousands of Egyptian Copts flocked to Jerusalem this year in celebration of Palm Sunday.

According to Egyptian media, at least 5,700 Coptic Orthodox Christians have travelled to Jerusalem so far this year, an increase of more than a thousand compared to the Coptic pilgrims who undertook a pilgrimage to the Holy Places of Jerusalem in 2015. Continue Reading » 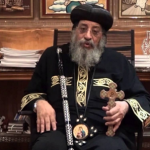 The Egyptian head of the Coptic Church, Pope Tawadros II, made a rare visit to Jerusalem to preside over the funeral on Saturday of a Coptic bishop.

The previous Coptic pope, Shenouda III, banned worshipers from traveling to Jerusalem more than three decades ago, despite a 1979 peace treaty between Egypt and Israel. Continue Reading »

Despite Egyptian Christians still officially  forbidden from visiting Israel by their religious leaders, Egypt’s airlines have tripled from the normal 4 per week to Tel Aviv.

While Jews around the world celebrate Passover, Christians from Egypt visit the Holy Land for their week of Holy Pascha (the Passion of Christ). For this pilgrimage, Egyptian Christians (Orthodox, Catholic and Evangelical) leave Cairo by the thousands on daily flights to Israel. Egypt’s airlines have increased departures to 12 flights per week from the normal four. In spite of the regularity of this annual event, rumors vilifying Israel propagate throughout the Egyptian press. Continue Reading »

Thanks to Western intervention, in this case, U.S. support for the Muslim Brotherhood and its jihadi offshoots, the renewal of centuries-old anti-Christian persecution has returned with impunity.

Now that the attacks on Egypt’s Christian churches have subsided, stage two of the jihad — profiting from the fear and terror caused by stage one — is setting in: reports are arriving that the Muslim Brotherhood and its supporters are forcing the roughly 15,000 Christian Copts of Dalga village in south Minya province to pay jizya — the money, or tribute, that conquered non-Muslims historically had to pay to their Islamic overlords “with willing submission and while feeling themselves subdued” to safeguard their existence, as indicated in Koran 9:29. Continue Reading »

Outside of Israel, Christians Are Endangered Species in Ancestral Land

According to the Vicar of St George’s Church in Baghdad, Israel is the single bright spot for Christians in the Middle East, a true bastion for religious minorities.

Egypt’s Christians are being targeted and scapegoated for the ousting of the Muslim Brotherhood. An Egyptian human rights activist tweeted that the Virgin Mary in Minya, one of the oldest churches in Egypt, built in the 4th century, was destroyed by fire yesterday. There have also been media reports about attacks on churches in the city of Suez and other villages. Jason Isaacson, Director of Government and International Affairs for the American Jewish Committee condemned these acts: “Organized violence against Egypt’s Copts, the murder of innocents and destruction of churches, is outrageous and unforgivable.” Continue Reading » 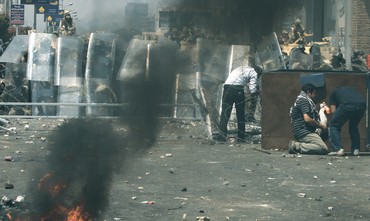 The murder of  Mina Aboud Sharween, a spiritual leader of Egypt’s 8 million Christians, is attributed to his supporting Morsi’s removal.

This latest sectarian attack appears to be 1st sign of ethnic violence since ouster of elected Islamist president Morsi.

CAIRO- Gunmen shot dead a Coptic Christian priest in Egypt’s lawless Northern Sinai on Saturday in what could be the first sectarian attack since the military overthrow of Islamist President Mohamed Morsi, security sources said. 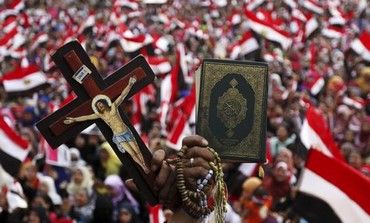 At least 30 people died and more than 1,000 were wounded after Morsi’s Muslim Brotherhood movement called “Friday of Rejection” protests across the country and tried to march on the military compound where the ousted president is held.

Podcast of Egyptian Crucifixions: Was it Fact or Fiction?

Sky News Arabia reported on August 9th that opponents of Egyptian President Muhammad Morsi were put to death and hanged from trees or crucified outside the presidential palace in Egypt. The story was removed shortly after being posted on the Internet.

Egypt has confirmed Christians’ fear of Islamic rule and has sentenced 12 to life in jail while acquitting eight Muslims.

Egypt has confirmed Christians’ fear of Islamic rule and has sentenced 12 to life in jail for their part in warding off Muslim mobs last year. The court acquitted eight Muslims. The Christians were found guilty and sentenced for killing two Muslims and for causing a disturbance in the April 2011 riots south of Cairo when a Muslim bus driver, angered by a speed bump in a Christian neighborhood, began to fight with security guards. Continue Reading »