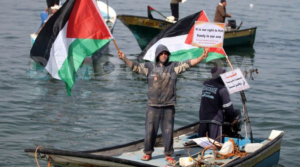 A fishing boat from Gaza seized last year by Israel’s navy after they found these cans of liquid fiberglass–used in construction of missiles & mortars. – Photo: IDF Spokesperson’s Unit

A fisherman who had been in the same area said Egyptian forces had opened fire on Abu Awad’s boat when it apparently approached or crossed the border Wednesday afternoon.

The union announced a one-day strike in protest at the killing.

The heavily populated Gaza Strip is wedged between Egypt, the Mediterranean and Israel, which imposes strict limits on how far Gaza fishermen can venture out to sea.

There is speculation that amid a potential Egyptian-brokered ceasefire deal between Israel and Hamas that Gaza’s fishing area will be extended from nine to fourteen nautical miles.

Egyptian officials and UN envoys have for months been engaged in sporadic discussions with Gaza-based Palestinian factions and the Jewish state in a bid to bring a cessation to continuous border violence.

Since the start of the ‘March of Return’ protests on March 30 of this year, at least 214 Palestinians have been killed by Israeli fire, dozens of which are said to be Hamas members. One Israeli soldier has also been killed since the protests and clashes began.

The enclave’s land border with Egypt had been largely sealed in recent years, but reopened in May as relations improved between the Egyptian government and Hamas.

Reports on the deal also claimed that there would also be some easing of Israel’s restrictions on the movement of goods and people exiting and entering the strip.