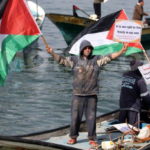 A fishing boat from Gaza seized last year by Israel’s navy after they found these cans of liquid fiberglass–used in construction of missiles & mortars.