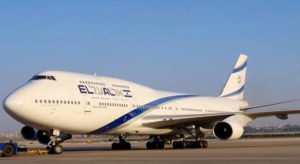 The request came in a letter on Wednesday from El Al’s chief executive to the International Air Transport Association (IATA), in which he said he has also approached Israel’s prime minister.

Saudi Arabia does not recognize Israel, though there has been a thawing of the relationship between the US allies, with a shared concern over Iranian influence in the region. Granting an Israeli airline access to its air space by lifting a 70-year-old ban, however, would mark a dramatic diplomatic shift.

The appeal is a response to plans revealed by Air India last month to begin direct flights to Tel Aviv which pass through Saudi airspace, a shorter route so far off-limits to all Israel-bound commercial planes. There has been no official announcement on whether Air India has received permission to fly over Saudi soil for its proposed thrice-weekly flights.

El Al’s CEO has now turned to the head of IATA, Alexandre de Juniac, saying he understood no such permission would be granted to Israeli jetliners and asking Juniac to step in to prevent “an uneven playing field.”

“I am approaching you and kindly requesting IATA to intervene and to represent aviation industry’s interest by advocating equal overfly rights for all carriers over the Kingdom of Saudi Arabia and opposing any form of discrimination,” CEO Gonen Usishkin wrote in the letter seen by Reuters. IATA’s membership includes 280 airlines in 120 countries.

El Al has yet to receive a response.

El Al currently flies four weekly flights to Mumbai, but these take seven hours rather than five as they take a route south towards Ethiopia and then east to India, avoiding Saudi airspace. Shortening the route would also be a significant cost-cutter.

Air India has not received any communication yet from the aviation regulator, a company spokesman said when asked whether the airline had received permission to operate flights to Israel over the Saudi airspace.

The proposed India-Israel route is a result of strengthening ties between the two countries.