Elbit acquires IMI, maker of the Uzi, for $522 million 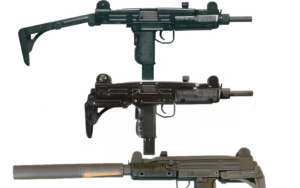 Israel is selling state-owned IMI Systems, maker of the Uzi sub-machine gun, to defense company Elbit Systems for more than half a billion dollars, the finance ministry said on Sunday.

The government began the process of privatizing IMI Systems, formerly known as Israel Military Industries, in 2013.

The firm is the manufacturer of the legendary Uzi sub-machine gun [top photo] and the Galil assault rifle. It also manufactures armored vehicles and trains security agents.

According to the agreement, Israel-based Elbit will buy IMI for 1.8 billion shekels ($522 million/424 million euros) and could pay the state another 100 million shekels based on IMI’s performance.

The finance ministry did not give a timeline for the finalization of the deal, which would have to be approved by the Israel Antitrust Authority.

IMI provides technologies and weapons to the Israeli army as well as to armed forces abroad, and employs some 3,200 people, according to its website.

Israel was the world’s sixth-largest defense exporter in 2016, according to industry analyst IHS Markit.