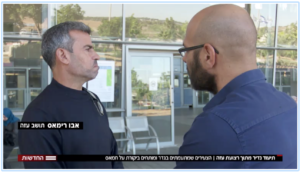 It doesn’t happen a lot that Israelis have the opportunity to see with their own eyes what Hamas is doing in Gaza, especially after the start of the ‘Great March of Return’ which started at the end of March and continues until this day.

There have been many reports about the deteriorating situation in Gaza where electricity and fuel are scarce and where most people don’t have any money to buy basic goods, according to NGO’s and humanitarian aid organizations.

But now, Israeli TV broadcaster MAKO sent a Channel 2 TV crew into the coastal enclave to interview Gazans and to film the violence from the Gaza-side of the border.

Reporter Ohad Chemo, who is fluent in Arabic, spoke with mostly young Palestinian Arabs in Gaza who told him Iran is paying damages to everyone who gets injured. A serious injured Arab who got hurt during the violence gets $500 and a moderate wounded person $200.

The family of a ‘Shahid’, a martyr, gets $3000 from Iran while Hamas is paying $100 a month to youths who show up at every ‘demonstration’ which have now become a daily occurrence.

Bus drivers who bring the rioters to the border with Israel, furthermore, get about $25 for a one-way trip while Hamas is encouraging mothers to participate in the violence together with young children in the hope they’ll get hurt or worse.

Injured Palestinian youths told Chemo they don’t believe in ‘the return’ and now think the whole strategy has become a failure.

“If there would be work and income nobody would show up” at the protests one older Arab told the Channel 2 reporter who said that many rioters are members of Hamas’ military wing Izz-a-Din al-Qassam.

They organize the violence and bring equipment to the security fence where IDF soldiers are blinded with lasers and heavy smoke caused by piles of burning tires.

“Hamas is the only group which profits from the violent demonstrations” others told Chemo.

The Israeli journalist later filmed shops and streets in the Gaza Strip and spoke with ordinary people some of whom asked Chemo to protect their security by blurring their faces and changing their voices during the interviews.

Shopkeepers in Gaza said there was plenty to buy but most people don’t have any money after employment hit a staggering 53 percent while 70 percent of the young Gazans are without work.

As a result of the diminishing purchase power many entrepreneurs in Gaza have gone broke while others were arrested and jailed after they failed to return their debts and to pay their bills.

Hamas is blaming Palestinian Authority leader Mahmoud Abbas for the dire situation in the Gaza strip after the latter first limited payments to the more than 60.000 civil servants in the enclave and later stopped paying them all together.

Huge billboards in Gaza city depict Abbas with blood on his face and read “Whoever punish us doesn’t represent us.”

UNRWA, the United Nations Relief and Work Agency, the body which takes care of roughly 5 million Palestinian refugees and all their descendants is now only providing people in Gaza with flour, one Arab said.

“We are living dead” another Palestinian Arab told Chemo while adding that the only thing which people are still able to do in Gaza is “breathing”.

The ones who still have money are Hamas members others told the Israeli reporter who then explained how Hamas is making money.

A truck driver who crosses into Gaza at the Keren Shalom border crossing  is forced to stop as soon as he enters the coastal strip after which he has to pay about $140 in fees.

Hamas also imports gasoline from Egypt for which it pays $0.23 per liter to the Egyptians after which the fuel is then sold for $1.62 per liter at gas stations in Gaza.

The same is true for cigarettes which are taxed with almost $1.20 per box by the Islamist terror group.

Asked if they ever thought of rising up against Hamas some interviewees said that there have been minor protests and strikes but Izz-a-Din al-Qassam simply shoots at people who dare to take the streets to express their anger at Hamas and the dire situation in Gaza.

Chemo also filmed squares in Gaza where Hamas has erected ‘monuments’, giant placates of M75 rockets which are pointed at Tel Aviv and Jerusalem.

He said that to him the situation in Gaza was “not clear” but he had signaled a lot of fear among those who were asked to be interviewed in front of the camera.

On the other hand, many people in Gaza still support Hamas and its relentless war against Israel, according to the Israeli Channel 2 reporter.

The second part of his report was broadcasted shortly before Israeli Security Agency (Shin Beth) chief Nadav Argaman told the Knesset Committee for Defense and Foreign Affairs that over the past year alone the Israeli security services foiled 480 terror attacks in Israel and arrested 219 Hamas squads.

Hamas is feverishly trying to carry out terror attacks in Israel from Judea and Samaria where it is trying to rebuilt the terror infrastructure which existed before and during the Oslo War, the so-called Second Intifada, Argaman reported.