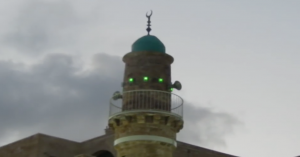 Residents of Jerusalem suburbs claim that since the Temple Mount crisis, nearby mosques have increased the volume of their muezzin calls, especially noticeable at both four in the morning and at seven in the evening calls to prayer.

Residents of Mevasseret Zion, a suburb of Jerusalem, are complaining that, since the Temple Mount crisis, the mosques in nearby villages and in Jerusalem have increased the strength of their muezzin calls.

Eliyahu Trabelsi, a member of the local Torah core group who studies at a kollel (institute of Torah study) in Mevasseret Zion, told Arutz Sheva that the volume of the muezzin calls has reached unprecedented levels. “In the past few days we have been hearing them both at night and in the morning, at a higher intensity than what we heard before. It’s at both four in the morning and at six or seven in the evening, and I have two children, one of them a baby. It’s extremely bothersome.”

Trabelsi hopes the authorities will deal with the nuisance. “The residents here have turned to the Council, and I hope they will take care of it and we can get back to normal, but I am a bit skeptical.”

It should be noted that in the past, the residents of Mevasseret Zion complained that the calls of the muezzin from the nearby villages of Beit Iksa and Beit Surik disturbed them – and letters were also sent to the Mukhtars of the villages – but this didn’t really help.

The Muezzin Bill is currently being discussed by the Knesset’s Constitution and Law Committee, and discussions are scheduled to resume in October after the Knesset recess.