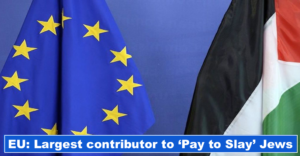 EU Palestinian worker photographed while brandishing a rock, ready to throw it at Israeli soldiers. – Regavim

The “restrictive list” refers to an EU terrorism database that blacklists “persons, groups, and entities involved in terrorist acts” which is “reviewed regularly, and at least every 6 months.”

The document says that all EU laws, such as the ban on funding terrorist groups must be respected but notes that “the EU is not asking any civil society organization to change its political position towards a Palestinian faction or to discriminate against any natural person on the basis of his political affiliation.”

Von Burgsdorff’s message came after months of protests by Palestinian NGOs demanding that the EU remove a stipulation that aid should only be sent to organizations unrelated to the terrorist groups designated by the EU.

In response, Israel’s Foreign Ministry said it was furious with the European Union’s decision and summoned its representative for clarification on von Burgsdorff’s letter.

“We view this letter with great severity. This is in violation of all our agreements with the European Union, and we intend to send a strong message to its representatives about this,” a Foreign Ministry spokesperson was quoted as saying.