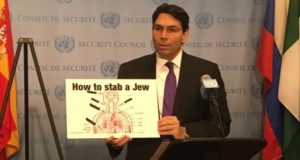 The announcement follows an investigation and campaign by IMPACT-se (Institute for Monitoring Peace and Cultural Tolerance in School Education). They found that the new Palestinian textbooks, releases in September 2018, are even more radical than previous editions, with hundreds of examples of extremism encouraging Jihad, violence, demonization and incitement against Israel and Jews.

The hateful content was found to be methodical and appeared in all subjects including mathematics, physics, biology, etc. One book for first graders features an image of a child smiling alongside “apostates” burning in hell.

The results of IMPACT-se’s investigation were shown to senior European officials and delegates at the EU Parliament.

In response to an official inquiry from a delegate, Mogherini confirmed that the that the EU will carry out an academic study of Palestinian learning materials and that funds were allocated for that purpose in the 2019 budget. The scrutiny is to be conducted by an independent, internationally respected research institution.

The purpose of the investigation is to “identify possible incitement to hate and violence and non-compliance with UNESCO standards regarding peace and tolerance in education,” Mogherini said. “Incitement to violence is incompatible with the promotion of the two-state solution, and greatly exacerbates the lack of trust between the communities.”

Mogherini’s response regarding the matter

The announcement of the study follows feedback from across the continent to the IMPACT-se campaign as well as increased awareness among European lawmakers.

In March, Britain announced its participation in the EU research effort. In January, the British parliament passed legislation preventing tax money from being used to promote hate. The German government also announced last December that it would launch an independent investigation into the contents of the new Palestinian textbooks.

Palestinian students admit to being taught to hate Jews and kill them. – Screenshots: The Center for Near East Policy Research

According to the investigation by IMPACT-se, the new textbooks deliberately omitted past peace negotiations with Israel, including the Roadmap, the Wye Agreement and even the peace treaty with Jordan. In addition, sections of study that taught about Jewish historical presence in Jerusalem and the Land of Israel were omitted. The word “Israel”, which appeared on several maps in the past, has been completely erased from maps in the new books.

“The European Union is the largest financial donor to the Palestinian Ministry of Education. But European taxpayers’ money and good will have been abused for years, with generations of young Palestinians systematically undergoing radicalization,” said Marcus Sheff, CEO of the institute. “There is no excuse and no justification. The PA takes hundreds of millions of euros and in return educates millions of children to violence, hatred and Jihad. We hope that the EU’s in-depth examination of this issue will help put an end to this abuse of children and will finally enable young Palestinians to finally receive a meaningful education for peace and tolerance.”

Following IMPACT-se’s campaign, the EU Parliament passed legislation in April 2018 intended to prevent European aid funds to the Palestinian Authority from being used to teach hate. In September, the EU’s finance committee froze 15 million euros destined for the Palestinian Education Ministry. Following a vote, the EU hosted a discussion on the matter and invited a representative from IMPACT-se to debate the Palestinian deputy education minister.

Most European Union aid funds, some 360 million euros, are for the Palestinian Education Ministry. The EU also donated $178 million to UNRWA and much of that is used to fund their schools which also teach the PA curriculum.