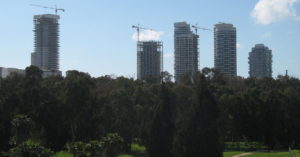 Global anti-Semitism is rearing its head, and Jews in Europe are starting to be afraid to wear kippot in public. Meanwhile, US synagogues are turning into sites of bloodbaths. The sense of insecurity many Diaspora Jews are feeling is prompting them to invest in homes in Israel, whether as part of a plan to make aliyah or out of a desire to have a safe haven in place.

Currently, there are some 14.5 million Jews worldwide, approximately 6.5 million of whom live in Israel.

The phenomenon is particularly prominent among French Jews, many of whom have made aliyah in the past few years out of fear they would be in danger if they remained in France.

According to David Refael, a real estate agent who founded the Refael Group, this means that demand for Israeli real estate will remain high. Refael noted that the same process takes place with every wave of aliyah. Prior to the massive influx of Jews from the former Soviet Union in the early 1990s, the average price of an apartment in Israel was some 300,000 shekels. The “Russian aliyah” caused home prices to triple, Refael said.

“Israeli developers should take advantage of the fact that it [the Israeli real estate market] serves a lot more people than actually live in the country, and take advantage of the opportunities before them – opportunities that, unfortunately, are the result of growing anti-Semitism and a growing sense of insecurity many of the Jews who live abroad feel,” Refael observed.

Moti Iloze of RE/MAX in Netanya, said, “This year, we are feeling an uptick in purchases of homes by Jews from abroad at a significant rate, which is having an obvious effect on the market. We sold three apartments to foreign Jews this week alone. One from Russia, one from France, and another from Britain.

“The Russian buyer never even came to Israel, we showed her the apartment on a live stream and she bought it on the spot,” Iloze said.

“This uptick is unusual, because last year, apartments in Netanyahu weren’t selling so quickly. Now they are. It’s definitely affecting the market.”

Diaspora Jews tend to prefer the more high-end areas of the Israeli real estate landscape, along the coastline, and therefore those markets are mainly the ones affected by what Diaspora Jewry are experiencing in their home countries.