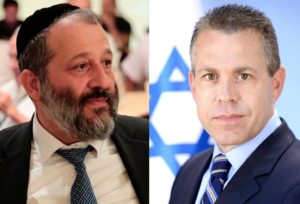 Due to their support of BDS and convicted mass-murdering terrorist Marwan Barghouti, Israel’s Interior Minister Deri and Public Security Minister Erdan announced jointly that they will refuse entry to a delegation of European officials.

By Itamar Eichner and Amir Alon

Interior Minister Aryeh Deri announced on Monday that he would adopt the recommendation of Minister for strategic affairs and public security Gilad Erdan, thereby refusing to allow a delegation of European parliamentarians and French mayors to visit Israel and the Palestinian Authority, due to their promotion of anti-Israeli BDS movement and intent to visit convicted Palestinian terrorist Marwan Barghouti.

BDS is NOT Welcomed to Israel. – Wikimedia/IsraelandStuff/PP

The delegation, which includes 20 participants, including French parliamentarians, European Parliamentarians and mayors, is scheduled to visit Israel and the Palestinian Authority on November 19-23.

The announcement was made in advance, so as to allow members of the delegation to be informed of the matter and not fly at all.

“This is not the first time that I have prevented the entry of BDS activists, but this time it is a delegation of senior European officials who are coming to act against Israel, so the subject has a different aspect to it,” Deri stated. “After examining their backgrounds and the circumstances of their visit, I decided that the delegation did not have a place in Israel.”

“We will not allow the entry of those who actively call to attack the State of Israel, especially in light of their request to meet and bolster the murderer Barghouti and thus support terrorism,” Erdan added. “These are senior politicians who consistently support and even promote boycotting Israel.”