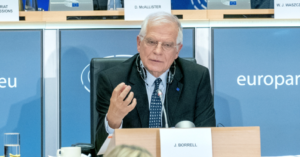 Earlier this week, Borrell urgently convened the EU to vote on a resolution condemning Trump’s plan and Israel’s intention to use it as a green light to annex large swaths of the so-called “West Bank.”

Even before Trump’s peace plan was made available to the Palestinians or the Israelis, Abbas’ public response was a loud “No” to the Peace to Prosperity plan, that included the Vision for Peace Conceptual Map, published by the Trump Administration on January 28, 2020.

But Borrell was thwarted.

Such foreign policy decisions and statements require the full consensus of all 27 EU member states.

And guess what? Not all 27 European nations seem to have a problem with Trump’s plan, or perhaps even with Israel finally exercising sovereignty over its biblical heartland.

According to Israeli media, six countries voted against the resolution. They were Italy, the Czech Republic, Hungary, Austria, and two unnamed states.

No doubt incensed, Borrell decided to release the statement under his own name.

“We are especially concerned by statements on the prospect of annexation of the Jordan Valley and other parts of the West Bank,” said Borrell said, despite the fact that officially he was speaking only for himself.

“Steps towards annexation, if implemented, could not pass unchallenged,” Borrell went on to threaten in what Israel Foreign Ministry Spokesman Lior Haiat called a “regrettable and odd” diplomatic assault on the Jewish state.

2/2 Pursuing such policies & conduct is the best way to ensure that the EU’s role in any process will be minimized.

Haiat in turn cautioned Europe that if Borrell is permitted to continue running his mouth like this, despite being opposed by a quarter of EU member states, it could cause Israel and the US to downgrade Europe’s involvement in the Middle East peace process.