EU’s Obsession against Israel is hindrance towards peace

Officials in Jerusalem to tell EU foreign policy chief Ashton, that “obsessive” focus on settlements and nothing on violent Palestinian attacks, incitement, or corruption gives the PA a ‘free pass’, undermining efforts to resume peace talks.

Israeli leaders are expected to tell EU foreign policy chief Catherine Ashton, when she arrives in the country on Thursday, that the EU’s “obsessive” focus on settlements is “undermining” efforts to restart peace negotiations by giving the Palestinians the impression that no matter what they do, European diplomatic fire will always be aimed at Israel. 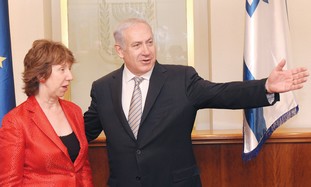 Ashton is scheduled to visit the country as part of a regional tour that will also take her to Jordan, Lebanon, Egypt and areas under the Palestinian Authority’s control.

During her stay in Jerusalem, she is scheduled to meet Prime Minister Binyamin Netanyahu and Justice Minister Tzipi Livni, who is in charge of negotiations with the Palestinians.

One Israeli official said that Ashton will be told that if the Europeans – no matter what the Palestinians do – persist in operating on “auto pilot” and focus solely on settlements, labeling settlement products and the need for Israel to transfer more of Area C to Palestinian control, then the Palestinians will continue to feel that they have a “free pass” and will not be held accountable by the Europeans for not returning to the table.

Ashton will be told that this policy is “undermining” US Secretary of State John Kerry’s initiative to restart the negotiations, and that the EU needs to back his efforts by making clear to the Palestinians that they do not have a blank check from the Europeans, and that their patience is not endless.

According to the official, the current atmosphere between Jerusalem and Brussels is “not good,” a product not only of the EU’s policy toward the settlements, but also because of its failure to place Hezbollah on its list of terrorist organizations and because of Israel’s frustration with the talks Ashton is leading with the Iranians in the name of the P5+1 (the US, Russia, China, France, Britain and Germany).

“On the one hand, the Europeans went very far with sanctions against Iran, but on the other hand, there are problems with the talks because they have not changed anything on the ground and only bought the Iranians more time,” the official said.

Regarding Hezbollah, since a consensus of all 27 EU nations is needed to blacklist the organization, the EU’s failure to do so is not Ashton’s fault. At the same time, the official added, the EU apparatus in Brussels could do more to get those countries opposed – primarily Ireland and the Scandinavian countries – to back the measure.

“She can be more vocal on this than in the past,” he said.

Ashton, the official added, will be told that the accumulative effect of all these issues – Israeli dissatisfaction with the EU emphasis on settlements, anger over the failure of the EU to blacklist Hezbollah, and frustration over the talks with Iran – is creating an atmosphere in which Jerusalem is not sufficiently confident in the EU playing the central role they are interested in playing in the diplomatic process.