Former Shin Bet head Yuval Diskin paints disconcerting picture of how Israel’s most sensitive decisions are made in his 1st interview since leaving office.

Yuval Diskin was once privy to top secret government discussions. As former Shin Bet chief, he sat in on meetings dealing with the Iranian threat, the Palestinian issue and Israel’s most grave security concerns.

By the nature of his office, Diskin witnessed Prime Minister Benjamin Netanyahu and Defense Minister Ehud Barak‘s conduct up close and personal. And by his own admission – he was horrified.

Diskin, a self-professed patriot and war hawk who insists he has no political agenda, served the defense establishment for 38 years, the majority of which were spent on counterterrorism efforts.

In his first interview since leaving office, he told Yedioth Ahronoth that he simply cannot keep quiet anymore. He has to say something, he said, before it is too late – before the third intifada becomes a fact, before Israel finds itself embroiled in a military campaign vis-à-vis Iran. 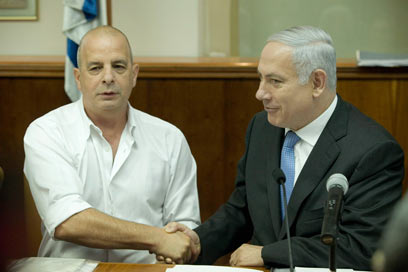 “My colleagues and I were very unsure of whether Netanyahu and Barak can lead an Iranian campaign. We didn’t trust their motives. We were worried that they might pursue various moves that would compromise Israel based on irrelevant considerations or via underhanded ways. We had a feeling that they were trying to sneak something under the radar,” he said in the interview, published on Friday.
As for Israel’s policy vis-à-vis the Palestinian Authority, Diskin said that “Israel upgraded Hamas and humiliated Abbas. We could have pursued various military moves that would have changes the picture, but Bibi and Barak are too weak.”

The prime minister’s personal and political interests, he said, always outweigh those of the State.

A game of egos

Diskin’s tone is unmistakable – a mixture of cynicism, disgust and profound concern – from one of the most prominent defense establishment chiefs of the past few decades. Interviewing for the documentary “The Gatekeepers” he sounded more angry and worried than ever.

“I’ve had the chance to work with the top political echelons since 1994,” he said. “I’ve seen all kinds of leaders – Rabin, Peres, Bibi, Barak, Sharon, Olmert and Bibi again. When I consider this spectrum I can say that Rabin, Peres, Sharon and Olmert – in the moment of truth – would always prefer State interests over their own.

“They didn’t always make the right decision, but you knew where they were coming from – Israel’s interests trumped anything else,” he said.

“Unfortunately, my feeling, and many others in the defense establishment share it, is that in the case of Netanyahu and Barak, the personal, opportunistic interests came first.”

The heads of the defense establishment, he added, often felt that Barak was even more ego-driven than Netanyahu: “With Barak, even when it came to the most sensitive discussions, the question of who gets credit for them was very important and at times it led to some very odd decisions.

“Obviously I can’t go into details, but suffice to say it left the members of those closed forums flabbergasted on more than one occasion.”

The Prime Minister’s Office issued the following statement following the interview: “Diskin’s ridiculous statements, made by a man who until six months ago wanted to be head of the Mossad, are recycled at this time for political reasons and stem from his own frustration about not being named to head the Mossad.”