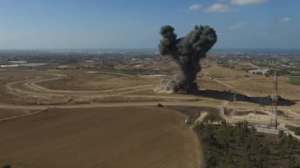 Palestinian sources said that from November last year until the end of May, the Israeli Air Force has targeted three trucks, including one carrying a shipment of Iranian missiles bound for the Islamic Jihad discovered in March.

Missiles from Libya seized by Egyptian authorities before entering tunnels to Gaza.

The trucks carrying missiles, weapons, and high explosive materials were on their way to Gaza after being transferred through arms dealers in Libya where they had been sold to Hamas and other militant groups by Palestinian intermediaries in various countries.

Israel is reportedly leading a large intelligence operation in Sinai to prevent the arrival of weapons and money to Hamas and the Islamic Jihad in Gaza through smuggling tunnels.

In recent years, Israel has bombed more than 13 tunnels dug by Hamas and Islamic Jihad to bring money, weapons, rockets, and materials to develop rockets and other explosives into the blockaded enclave.

Residents in Rafah, located in the southern Gaza Strip on the border with Sinai, say they have witnessed several times incidents of Israeli planes attacking targets inside Sinai without knowing what is being targeted, the Palestinian sources said.

It is unclear if the activity targeting Gaza militants’ weapons arsenal is connected with Israel’s ongoing cooperation with Egyptian security forces to fight Islamist terrorism in the restive Sinai region.