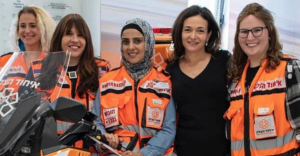 While visiting Israel with her family, Facebook COO donated an ambucycle to the Israeli EMS organization, saying how she was “in awe of these brave women and all of the United Hatzalah volunteers, who race toward people when they need help most.”

Facebook COO Sheryl Sandberg and her family dedicated a new ambulance to Israeli EMS organization United Hatzalah during a visit to the organization’s national headquarters in Jerusalem last week.

The ambulance will be stationed in the southern city of Sderot, servicing the city and surrounding area that is often victim to Hamas rocket fire from Gaza.

The Sandberg family’s visit focused on United Hatzalah’s women’s unit, which sends female EMTs to treat other women, particularly when dealing with sensitive and private issues such as childbirth and miscarriage. They met a diverse range of women: unit founder Gitty Beer; Orthodox mother of three Sassya Simon; Rania Abu Shaban, a devout Muslim whose grandmother died while waiting for an ambulance; and Kayla Tzur, who responds to multiple emergencies a day via bicycle.

“United Hatzalah’s work to quickly respond to emergencies and save lives is one of the most impressive programs I’ve ever seen,” said Sandberg.

“I’m in awe of these brave women and all of the United Hatzalah volunteers, who race toward people when they need help most.”