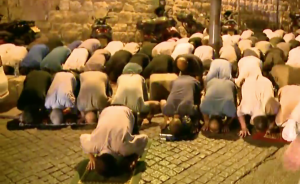 In addition, Tanzim—the militant faction of Fatah—decided that Friday prayers would be held in squares in the main Palestinian cities and sermons would be dedicated to the Al-Aqsa Mosque and against Israel’s increased security measures.

In addition to beefing up the security measures, Israel also installed metal detectors in response to Friday’s deadly terror attack that claimed the lives of two Israeli police officers..

On Monday night, protests staged by Muslim worshippers against the new security measures continued and escalated as Molotov Cocktails and rocks were hurled at Israeli security forces in the Palestinian neighborhood of Silwan.

Angry crowds gathered near the Lion’s Gate in Jerusalem over the installation of metal detectors at the entrance of the Al-Aqsa Mosque following Friday’s attack.

According to police, dozens of masked youths made their way to the gas station at the entrance of the neighborhood and threw rocks and Molotov Cocktails at the personnel and onto the road, causing a fire which was eventually extinguished by firefighters.

A policeman was struck with a rock in his leg and taken to hospital in light condition while damage was also caused to a police vehicle. In addition, a man was arrested after he was seen carrying a knife.

Static.GulfNews.com points out the utter hypocrisy of Palestinian objections as photo demonstrates clearly how metal detectors are used to secure the Holy site in Mecca.

Acknowledging the sensitivity behind the new metal detectors, Prime Minister Benjamin Netanyahu insisted that they were nevertheless necessary to prevent further terror attacks. “I understand there is friction around the matter of the metal detectors. But we also understand that we can find ourselves in another terror attack like this and these means are necessary, including the security cameras that we intend to place around the area,” he said.
View original Ynet publication at:
http://www.ynetnews.com/articles/0,7340,L-4990933,00.html
Category: Israel News | Tags: 'day of rage', anti-Israel Protesters, East Jerusalem, Fatah, magnometers, Temple Mount