6,300 Jewish Ethiopians made it to Israel in last three years.

From now, aliyah requests for Falashmura Jews to be handled on individual basis, like everywhere else.

On August 28, two last flights will land in Israel, bringing 400 Falashmura new immigrants to the holy land. After this, the Jewish Agency will be closing down its camp in Gondar and the interior minister will hold an emergency hearing for all those who received negative answers. 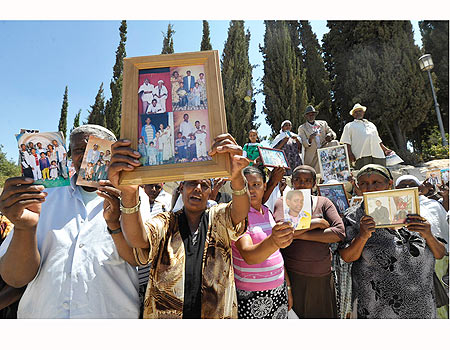 Since 2010, 6,300 Falashmura Jews have been accepted for aliyah, thousands more were refused and at the end of August, for the last time, 400 will make aliyah, on two incoming flights.

On Monday, as operation ‘The Wing of the Dove’ neared its end, the Knesset’s Immigration Absorption Committee, headed by MK Yoel Razvozov (Yesh Atid), held an urgent hearing on the status of those refused aliyah.

With the operation’s end after nearly 20 years, the community center in Gondar, run by the Jewish Agency, will close its doors. After this, immigration to Israel will be possible only through private requests, which will be examined by a committee overseen by Interior Minister Gideon Sa’ar.

“We do not have another aliyah planned with the end of the operation, except via individual request, as we have many families whose immediate relatives are in Israel, but which have been refused immigration.”

On Monday, MK Hilik Bar, whose request led to the hearing, said, “It’s a decision that leaves something to be desired, and I ask that the special cases committee that was established should turn into an appeals committee and open its gates.”

But the prime minister’s representative, Ehud Brauer, the director of policy planning at the prime minister’s office, emphasized that Israel is closing its gates and that there would be no discussion of the issue. “The basic idea was to make a broad, collective effort, and following this, to allow private requests which would be dealt with as appropriate.”