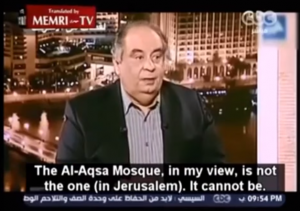 An Egyptian philosopher and expert on  Arabic and Islamic studies,  Ziedan sat in the Egyptian CBC studios and explained at length to his host why, in his opinion, Muslim claims over al-Aksa mosque in Jerusalem are baseless. The CBC interviewer, Khairy Ramadan, challenged Zieden while taking in his words eagerly.

At the end of a two-hour long session, the well-known Egyptian intellectual Ziedan stepped out of the studio into the fresh air and began his journey home to Alexandria.

The storm broke out that night.

“Ziedan is ignoring the tenets of Islam and is entering a dangerous circle,” Dr. Abbad al-Fatah Hader, a lecturer on Koran studies at Al-Azhar University, warned. “Whoever questions the truthfulness of the Koran is a heretic.”

“Beit Hamikdash is a Hebrew term,” Ziedan insisted in his interview. “Hence, in my opinion, the al-Aksa mosque isn’t legitimate. Al-Kuds, the temple, is an ancient Hebrew word, and Muslims adopted the word.” He turned to his Muslim brethren and said: “You’re annexing the city, annexing the word, and claiming that it is holy to you. But from where exactly? Can you tell a Jew that Jerusalem is not his?”

It is doubtful that an Israeli exists who is more eloquent than Youssef Ziedan, a Muslim from birth, who has never been to Israel or been a particular fan of the Jewish nation, and remains one of the most important researchers on religions in Egyptian academia.

Jerusalem is not explicitly referenced in the Koran. In their claims on the Temple Mount, Muslims reference the term “Al-Aksa Mosque,” which does appear in the holy book, sans a geographic pinpoint. Ziedan claims that interpretation claiming that the mosque is situated precisely in Jerusalem, is baseless.

The Muslims base their claims on the first verse in chapter 17 of the Koran, titled, “The Night Journey,” which reads: “Glory be to Him, who carried His servant by night from the Holy Mosque to the Further Mosque.” Based on the Muslim faith, the verse speaks of a miracle bestowed on Muhammad by God, in which the messenger (Muhammad), was led in the middle of the night from the mosque in the city of Mecca (the “Holy mosque) to a mosque in another city (the “further mosque), further away, believed to be al-Aqsa mosque, which, for generations, was interpreted as having been located in Jerusalem.

Ziedan however, has his own, alternative theory. He claims that the phrase “Al Aksa” refers to a mosque on the outskirts of the city of Ta’if, west of Mecca. He bases his hypothesis on the teachings of the ancient Muslim historian Al-Waqidi, born 100 years after the appearance of Muhammad, who made similar claims.

“Al Aksa mosque didn’t exist back then,” said Ziedan, “there was no city named al-Quds and modern teachings claiming this are disastrous.”

Khairy Ramadan challenged Ziedan, and asked him why he believes Muslims today insist on the holiness of Jerusalem. Ziedan attributed the stubbornness to politics. “The religious aspect in the Arab-Israeli conflict is intentionally political.”

Ziedan claimed that Al-Aksa mosque in Jerusalem was built by Abd al-Malik ibn Marwan, the 5th caliph of the Umayyad Dynasty in Damascus, 73 years after the founding of Islam. If this is true, then Al-Aksa could not have been in existence when Muhammad made the overnight journey in the Koran’s 17th chapter. Ziedan said that Marwan built al-Aksa in order to infringe on the prestige of Mecca, which at the time was controlled by his political enemies.

“Al-Aqsa mosque was a pawn in a political game, led by ibn Marwan,” said Ziedan.

Ziedan’s controversial interview surfaced at a sensitive time – a time when Palestinians and Israelis are engaging in violent confrontations in the West Bank, while the Muslim world is echoing cries of concern over Al-Aksa, claiming that it is in danger due to Jewish presence on site.

In his CBC appearance, Ziedan went further, clearing the Israeli government of responsibility from Palestinian claims that it was at fault for the 1982 massacres in the Palestinian refugee camps of Sabra and Shatila. Ziedan said that, since the massacre was carried out by the Kataeb Party, also known as Phalange – predominantly Christian Lebanese and right-wing – there is no reason to blame Ariel Sharon, Minister of Defense at the time.

The Egyptian newspaper, Al-Dustour, mocked Ziedan for these comments and coined him as the “occupation’s defense attorney.”

Youssef Ziedan is an Egyptian scholar who specializes in Arabic and Islamic studies. He works as director of the Manuscript Center and Museum affiliated to the Bibliotheca Alexandrina. – Wikipedia

Dr. Youssef Ziedan, 57, a lecturer at the University of Alexandria, is a philosopher and expert in Arabic and Islamic studies. He is secular and outwardly opposes the Muslim Brotherhood. Ziedan has written a number of novels in the past decade, many of which have been best-sellers in the Arab world. His most known work, titled Azazeel, has been translated into 16 languages and has awarded Ziedan international recognition.

His most recent CBC interview is not the first instance at which he speaks up against mainstream Islam.

In a televised interview a year ago, Ziedan proposed that Egypt reevaluate its relationship with the Jewish nation. He explained that a historic rivalry with Judaism negatively influenced Muslims, and, in modern days, is used by politicians as a means of manipulation in order to seed provocation. “Whoever wants to win over the public, must curse Israelis” Ziedan said, “but after they rise to power, they treat them nicely.”

“It’s idiotic,” he explained, “and exploits the ignorance of the public.”

Yet some Muslim clerics and experts on Islam were outraged and defended the belief that al-Aksa was, indeed, the mosque referenced in Chapter 17 of the Koran.

Dr. Abbed al-Munam Fuad, a university lecturer on theological thought, said that Ziedan “must be brought to trial.” He said that with his statements, Ziedan is “trying to undermine the ideological security of Muslims.” Dr. Muhammad Muhanna, of Al-Azhar University, insisted that to counter Ziedan’s claim about al-Aksa, religious greats must prove the accuracy of the 17th chapter’s first verse.

Dr. Abbad al-Fatah Hader, who called Ziedan a heretic for his claims, said that he must “express regret to Allah,” in order to be cleared of shame, or blame.

“There is freedom of thinking – a man can think as he wishes – but when you speak, your words need to be accurate,” he said.

“The greatest learners of Islam agree that one must make pilgrimage to al-Aksa. The disagreement is over whether one should make the journey on an Israeli visa or not, under the ‘occupation’ or not,” he said.

Despite harsh criticism, no one demanded that Zeidan face extreme, harsh repercussions for his statements – such as revoking his position at the university, or inflicting physical punishment on him. No court complaint was filed against him, and should one be filed, it is likely that it will mysteriously disappear.