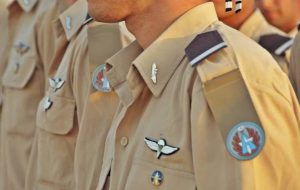 The cadet is currently in the initial flight stage of the course, after which the IAF makes a round of cuts. There is no guarantee that the cadet will become a pilot, as only about 10% of the cadets who begin the course complete it and earn their pilot wings in the touching ceremony held at the Hatzorim Air Force Base.

Only a small percentage of military recruits are accepted to the hallowed pilots course in the first place, and they undergo extensive medical testing as well as drills that test their physical and mental abilities.

There have been Druze cadets who completed the pilots course and served as pilots, but this cadet is the first Christian Arab to start the rigorous training. Israeli Arabs, Christian or Muslim, are not required by law to enlist in the military. All those who serve do so voluntarily.

Unlike Christian Arabs, Muslim Bedouin have been volunteering for military service since the state was founded. In recent years, some 350 Bedouin have enlisted each year, most of whom have come from northern Israel. Some of the Bedouin who choose to serve, particularly those from the south, face harsh opposition at home to their choice to enlist.

Military enlistment for Christian Arabs is still in its infancy, but has been gathering steam in the past five years. Despite criticism within Arab society, several dozen Christian Arabs are currently serving.

The IDF notes that all roles are open to Christian Arab volunteers provided they meet the same job and security requirements as all other soldiers, as proved by a cadet from that sector earning a place to train for one of the military’s most prestigious, classified jobs.