Flotilla of women set sail from Barcelona to Gaza 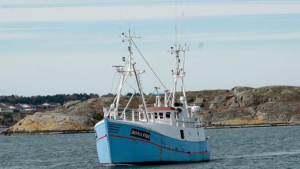 A new women’s flotilla aimed at violating the Israeli naval blockade on Gaza left on Wednesday from the Spanish city of Barcelona, Al Jazeera reported.

Two sailing boats, Amal and Zaytouna, with 11 women on board each, sailed off under the banner “The Women’s Boat to Gaza”, according to the report.

The passengers include Swedish European Parliament Member Malin Bjork and Dr Fouzia Hassan of Malaysia. They aim to reach Gaza by early October.

“We are carrying food and medicine on the boat that will be distributed to Gazans upon arrival,” Zohar Chamberlain Regev, a spokeswoman of the initiative, told Al Jazeera.

“But mainly we are carrying a message of hope and solidarity, because we think Gazans want that most of all.”

She said she had high hopes that the flotilla would not be stopped by the Israeli navy and reach the destination.

Photo from Womens Boat to Gaza website proves they are more anti-Israel than pro-Palestinian, by not knowing the flag is hoisted up-side-down.

“We know that we are not a threat to Israel. We are not heading to an Israeli port so they have no reason to stop us,” she told Al Jazeera.

Last time the Women’s Boat to Gaza attempted to enter Gaza in 2015, the Israeli navy boarded and took over its vessel, Marianne. The boat was taken to the Israeli city of Ashdod to have its contents inspected.

The women’s initiative is one of several recent attempts to break Israel’s naval blockade on Gaza, which a UN team has said is completely legal.

The first, and perhaps most famous flotilla, was the 2010 Mavi Marmara flotilla. When the ships taking part refused to stop IDF soldiers boarded, upon which they were assaulted by the “humanitarian” activists wielding knives, iron bars and other lethal weapons.

The soldiers were forced to open fire to save their lives, killing ten of their assailants and sparking an international media backlash.

Despite the supposed “humanitarian” aims of the effort, Israel found the flotilla in fact was not carrying any humanitarian aid, or any other type of supplies for that matter.