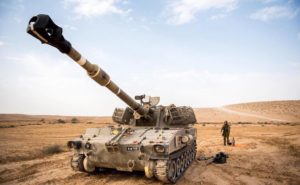 Just as the rare flower starts blooming, residents from Gaza border communities turn to IDF generals to save the Iris Mariae, endemic to the Negev, from IDF soldiers’ boots and batteries of the defense units stationed in open desert areas.

Residents of Israeli communities close to the Gaza border have united to save a rare flower that was in danger of being crushed by the anti-missile Iron Dome system and the IDF troops that operate it. The Iron Dome plays a central role in protecting the local residents from frequent rocket strikes from the Hamas-ruled coastal enclave.

The local residents approached GOC Southern Command Maj. Gen. Herzl Halevi and Israel Air Force Commander Maj. Gen. Amikam Norkin, and requested that the Iron Dome system be moved elsewhere, in order to save the Iris Mariae, which grows in the area.

“We are grateful for and appreciate your work, and there is no need to explain how meaningful your presence here is for us and for our sense of security. But we feel it’s fundamental that we work together to preserve the surrounding sites of nature.”

The IDF has found a new spot for the Iron Dome system, but as it is yet to be moved, the local flora is still in danger.

An IDF spokesman said that the process of relocation is underway and that the military placed an emphasis on conserving the areas in which they operate.

“We have started the process of moving the Iron Dome system to an alternative site,” the spokesman said. “The placement of heavy artillery is coordinated with regional councils, the Nature and Park Authority and the Jewish National Fund (which plants trees in Israel). Combat troops appreciate the importance of preserving nature in the area in which they operate.”