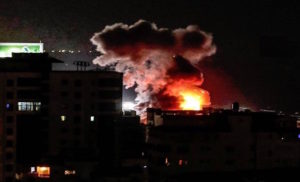 The IDF Spokesperson’s Unit said shortly after midnight that, over a period of five hours, approximately 70 rockets were launched from the Gaza Strip at Israel.

At approximately 1:00 a.m., two rockets exploded in Sderot, one in the vicinity of a factory and the other at the entrance to a home. There were no injuries but damage was caused.

At least two people, including a 13-year-old boy, were injured in Sderot during the initial barrage of eight missiles.

Earlier on Wednesday, the IDF struck 12 targets in Gaza in retaliation for the rocket barrage.

The targets include a tunnel-part and concrete factory, an offensive maritime terror tunnel shaft along the coast and several terror sites in military compounds throughout the Gaza Strip, among them rocket manufacturing facilities and a central logistical military complex.

The tunnel-part factory is a site which was intended to be used as a hotel, and was overtaken by the Hamas terror organization in 2012. The factory manufactures parts for offensive terror tunnels under civilian disguise.