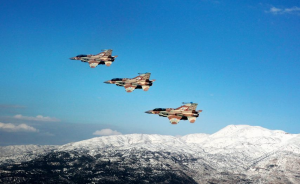 “I contacted the Israelis to try to recover the Golan Heights, but they demanded the opening of an Israeli embassy in Damascus and a Syrian one on their land as a kind of Syrian recognition of the Israeli state,” he told al-Hayat.

According to the report, the discussions in 1998 between Israel, led at the time by Benjamin Netanyahu, was rejected by former Syrian President Hafez al-Assad.

The recognition of Israeli sovereignty over the Golan Heights by US President Donald Trump on March 25 “was the result” of the failed talks, the former Egyptian strongman said.

Mubarak was quoted as telling al-Hayat that while former Israeli prime minister Ariel Sharon was more amenable to collaboration, “Netanyahu is one of the most difficult people” that he dealt with.

Last year Uzi Arad, a former adviser to Netanyahu told Israel’s Army Radio that the prime minister held two rounds of “serious” negotiations over the past decade with Damascus over relinquishing the Israeli Golan Heights to Syria.

The first round of negotiations in 2009 were abandoned until Washington was able to convince the two enemy countries to engage in indirect talks the following year. The talks that began in 2010 were abruptly halted in 2011 due to the outbreak of the Syrian civil war.

According to a 2012 report by Yediot Aharonot which quoted a senior American official directly involved in the negotiations, the talks were “serious and far-reaching and would have likely ended with an agreement had they not been interrupted” by the civil war.

Former US Ambassador to Israel Dan Shapiro told The Jerusalem Post that the basis of the negotiations was a “land for peace deal” similar to the peace treaty between Israel and Egyptian.

But, he said, “it was a fool’s errand. The Syrians were never prepared to end their relations with Iran and their support for Hezbollah. That was far more important for the Assad regime than recovering the Golan Heights.”

Shapiro, who served as US Ambassador to Israel between 2011-2017, was in Washington at the time and involved in the policy coordination at the National Security Council.

Israel captured the Golan Heights, some 1,200 sq. km., from Syria during the Six Day War in 1967 and unilaterally annexed the strategic plateau in 1981. Under the 1974 ceasefire accord signed following the Yom Kippur War the previous year established a buffer zone between the two enemy country. It was patrolled by UN troops until peacekeepers were abducted by Syrian rebels 2014.

Syrian troops recaptured southern Syria seven years after losing the area to rebel groups and returned to its positions along with Hezbollah operatives. Both UN Peacekeepers and Russian military police have been deployed along the Golan Heights border.

Last month the IDF announced it had uncovered a Hezbollah network in the Golan Heights which it said was planning to act against Israel when given the order.