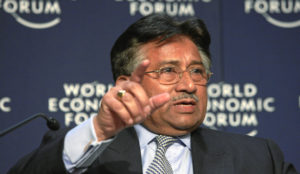 Speaking in Dubai, former Pakistani president Pervez Musharraf, who established contact with the Jewish State in 2005 via Jack Rosen, a U.S. businessman, told a journalist that there is no harm in establishing diplomatic relations with Israel.

He was speaking at a press conference on February 22 in Dubai, where he has been living in self-exile to avoid what he believes are politically motivated court cases back home.

Pakistan Passport, ‘not valid for travel to Israel’ – Twitter

“There is no harm to establish a relationship with Israel,” Musharraf said, adding that “it will help Pakistan counter India” by accessing an “elite club” of “influential” nations. His remarks came as tensions between Pakistan and India spiked over the contested Kashmir region.

Musharraf led Pakistan from 1999 to 2008. He was a strong critic of Israel until 2005, when he established contacts with the help of Turkey. Since then, he has been a staunch supporter of ties between the two countries.

“As expected, the Israeli leadership responded to my offer within 24 hours,” he stated, adding he believed that Israel would still welcome such ties.

The former president claims to enjoy support from Pakistan’s military establishment and cabinet members in the government of Prime Minister Imran Khan.

There was no official Pakistani reaction to Musharraf’s comment, although Foreign Minister Shah Mahmood Qureshi told The Media Line that the Palestinian issue would first need to be solved.

“Pakistan has had a pro-Palestine stance for long time. We cannot even think of establishing contact with Israel until Palestine is internationally recognized as an independent state,” he said.

Anti-Israel sentiment is currently at an all-time high in Pakistan, a Muslim-majority country of 220 million people.

Musharraf’s initial efforts to establish ties with Israel led to a 2005 meeting in Turkey between the two countries’ foreign ministers. The meeting was facilitated by Jack Rosen, a U.S. businessman and today president of the American Jewish Congress.Musharraf addressed a gathering of the World Jewish Congress in September of that year.

“Pakistan has no direct conflict with Israel,” he said at the time. “Also, Pakistan is not a threat to Israel’s security. Israel represents no threat to Pakistan’s national security. But I have sympathy for the Palestinian people and their legitimate desire for a state,” Musharraf said.

In his speech, which was hailed by many back in Pakistan, he praised Israel’s 2005 withdrawal from the Gaza Strip, calling it a “courageous decision.”Nevertheless, his suggestion that Pakistan be open to diplomatic relations with Israel sparked fierce reactions from individual Pakistani political figures, even within his own government. They included Ijaz ul-Haq, his minister for religious affairs and minorities.

“We can’t even think of establishing relations with Israel. No, not at all,” Haq, currently president of the Pakistan Muslim League, told The Media Line.

Nariman House, the home that the terrorists in the November 2008 Mumbai attacks, attacked killing a Jewish family among other Jews at the other targets. – Photo: Nicholas (Nichalp)Wikimedia

As president of Pakistan and head of its army, Haq’s father, Zia ul-Haq, allowed the nation’s Inter-Services Intelligence agency (ISI) to establish links with Israel’s Mossad in the early 1980s.

According to WikiLeaks, the ISI secretly provided intelligence to the Mossad indicating that Israeli civilians might be targeted in a terrorist attack in India in 2008. Several Israeli citizens were indeed killed in November of that year during a massive series of attacks in Mumbai, one of them targeting the city’s Chabad House.

A source in Islamabad said that then-ISI chief Lt.-Gen. Ahmad Shuja Pasha personally established direct contact with the Mossad to pass on the information.

Written by Kaswar Klasra and reprinted from The Media Line.