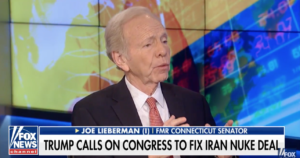 The president is required by law to report to Congress every 90 days on Iran’s compliance – or lack thereof – with the terms of the JCPOA. Failure to certify Iranian compliance would compel Congress to either reimpose some US sanctions on Iran, or force Congress to pass new legislation altering those sanctions.

In an interview with Fox News Sunday, Lieberman, a long-time opponent of the JCPOA, lauded Trump’s decision.

“I totally agreed with the president’s decision,” Lieberman said. “It showed again that elections have consequences. We went from an administration that stretched to reach this agreement and protected it almost at any cost regardless of what Iran was doing, to now, this administration which basically says this is a bad agreement for the security of the United States.”

“I thought the president made the right decision and made it in the right way. He could have withdrawn the other day, on Friday. But he basically said to Congress, our allies, and the Iranians, that we’re going to pull out of this agreement unless it changes.”

Lieberman, who crossed party lines ahead of the 2008 presidential election to endorse Republican nominee John McCain, backed Hillary Clinton against Trump in 2016.

But Lieberman differed sharply both with President Obama, who pushed the deal as president, and former Secretary of State Hillary Clinton, over their support for the Iran deal and the series of side-agreements between JCPOA signatories and Iran which enabled Tehran to avoid decertification after failing to comply with elements of the agreement when it went into effect in 2016.

On Sunday, Lieberman reiterated his call for the JCPOA to include a provision permanently barring Iran from pursuing nuclear weapons, as opposed to the temporary ban provided for in the existing agreement.

“[W]e’re asking the Iranians to agree not to develop nuclear weapons. That was the whole purpose of the sanctions, and the deal only puts a pause, saying that in eight or ten years they can start doing things that will allow you to build nuclear weapons again.”