During a debate at Arizona State University against anti-Israel Israelis of the far left, I told the story of Haj Amin al-Husseini, founder of the Palestinian national movement and protégé of Adolf Hitler. Seeing heads shake in disbelief, I challenged those who doubted these facts to Google it. I recommend the same to any reader doubting the absolute veracity of the story I am about to relate, which is so incredible you might think it an exaggeration.

It is actually not surprising that most of the audience at ASU was unfamiliar with Husseini. His name is never mentioned, and is perhaps no longer well-known, even among the Palestinian Arabs, whose national movement he founded. His alliance with the Nazis and participation in the Holocaust undermine the Palestinian portrayal of themselves as innocent victims of the Jews, and so they suppress the history of Husseini and the Nazi roots of Palestinian nationalism. For this very reason, it is critical for Israel’s supporters to understand who Husseini was and in particular his genocidal ideology and goals, as these remain the ideology and goals of the Palestinian national movement to this very day.

On Aug. 24, 1929, Husseini engineered the end of the 3,200-year-old continuous Jewish habitation of Hebron. Under his direction, Palestinian Arab mobs screaming, “Itbach el-Yahud” (slaughter the Jews), attacked the Jews of Hebron and without provocation murdered or expelled all of them and stole their property. Hebron, second only to Jerusalem in holiness to the Jews, had a Jewish community dating back to the second millennium BCE, thousands of years before the arrival of the Arabs in the in the seventh-century C.E. Even after the Arab conquest, Jews continued to live in Hebron, although now in the status of second-class citizens (dhimmi) imposed on all non-Muslims.

The vicious massacre of the ancient Jewish community of Hebron was not the first organized by Husseini, nor was it a reaction to anything Israel had done, as the Jewish state would not be reborn for another 19 years. Nor can it be attributed to Israeli “occupation,” as Israel would not recapture Hebron until the Six-Day War 38 years later. The Hebron massacre was the beginning of a plan for genocide against the Jews in the Land of Israel organized by Husseini, the grand mufti of Jerusalem and founder of the Palestinian national movement.

He preached that Arab Muslims had exclusive rights to the Land of Israel and schemed genocide against its ancient Jewish community. Finding a kindred spirit, and common cause, with Adolf Hitler, Husseini urged Arab support for the Nazi cause. 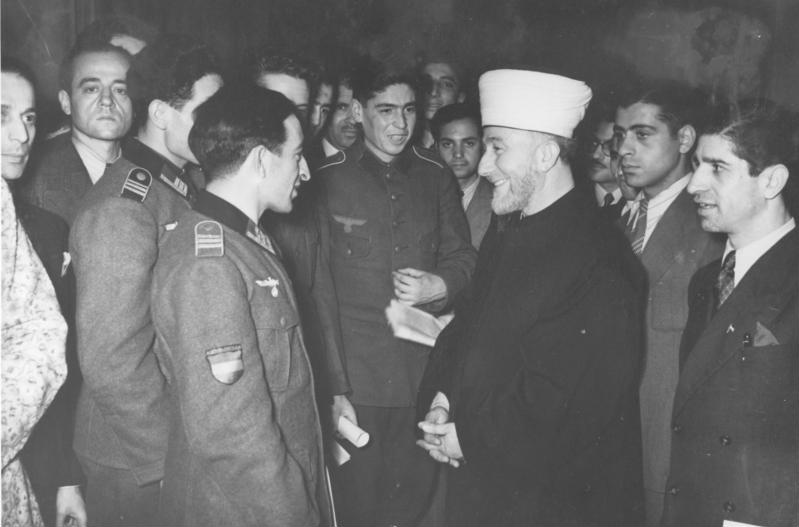 Al-Husseini meeting with Muslim volunteers, including the Legion of Azerbaijan, at the opening of the Islamic Central Institute in Berlin on 18 December 1942, during the Muslim festival Eid al-Adha. – Wikimedia Commons

After their seizure of power in Germany, Husseini sought to coordinate his genocidal war against the Jews with that of the Nazis. To bring this about, Gestapo chief Reinhard Heydrich sent two emissaries – one of whom was Adolf Eichmann, the future chief administrator of the Holocaust – in 1937 to meet with Husseini in Palestine.

For his pro-Nazi activities, Husseini was sentenced by the British to 10 years in prison at the outbreak of World War II. Husseini fled the country and made his way to Iraq, where he was instrumental in a pro-Nazi coup and the prime mover in the “Farhud,” a two-day orgy of violence that decimated the ancient Jewish community of Iraq. When the British regained control of Iraq, Husseini fled to Nazi Germany, where he offered his services to Hitler and served as his adjunct on the final solution. Eventually, Husseini was sent by Himmler to the Balkans where he established the pro-Nazi Handzar SS division, made up of Bosnian Muslims who committed atrocities in Hungary and Serbia. After the war, Husseini fled yet again, this time to Egypt where he was given asylum and again escaped justice. He was never tried or punished for his massacre of Jews in Hebron or war crimes in the Balkans.

Both Husseini and the Palestinian national movement he founded faded into obscurity. However, two decades later Husseini’s genocidal war against the Jews was revived by his relative and protégé Mohammed al-Husseini. Born in Cairo, Mohammed al-Husseini sought to hide his family’s connection to the Nazis and changed his name to Yasser Arafat. Symbolically, Arafat gave Aug. 24, 1929, the date of the Hebron massacre, as his birthday.

Although taboo in Europe after the Holocaust, Arafat continued to spread Husseini’s Nazi-like genocidal program against the Jews, not only among Palestinian Arabs but throughout the Arab world and ultimately to non-Arab Muslim countries like Iran and Turkey. The ruling Baath Socialist Parties of Syria and Iraq, for example, openly emulated National Socialist Party organization, methods and genocidal program against the Jews. When Adolf Eichmann was captured and executed by Israel, he was eulogized throughout the Arab world. Anti-Semitic caricatures of Jews that would not have been out of place in Der Sturmer routinely appear in the Arab press. Viciously anti-Semitic Arabic movies and mini-series based on themes like the medieval blood libel are run on modern Egyptian and Turkish TV. In 2006, the Iranian government sponsored a world conference of Holocaust deniers, and its leaders have openly called for genocide against the Jews of Israel. Similar calls for genocide against the Jews are found in the Hamas charter and routinely issued by Hezbollah leader Hassan Nasrallah, among others.

No amount of wishful thinking in Israel can turn the Palestinian national movement into a genuine partner for peace as neither the PLO nor Hamas are genuine, constructive movements of national liberation. Like its former Nazi allies, the Palestinian movement does not seek to live with the Jews, but to annihilate them. In this light, the continuous mass murder of Jews by Palestinian terrorists takes on an even more sinister character. Palestinian terrorism must be understood in this context and seen for what it is: attempts to repeat the Hebron massacre throughout the Land of Israel and ultimately to re-create the Holocaust against 6 million Jews of Israel. That is why neither Hamas nor the Palestinian Authority has done anything to improve the lives of those under their rule, but instead pour all their efforts into seeking to delegitimize and destroy Israel.

Devin Sper lived in Israel for 10 years, has a degree in Jewish history from the Hebrew University of Jerusalem and served in the Israel Defense Forces.

He is the author of “The Future of Israel,” and winner of a 2005 GLYPH award.