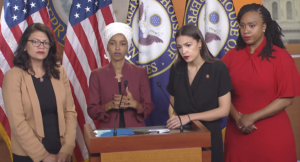 With Democratic Reps. Rashida Tlaib (MI), Alexandria Ocasio-Cortez (NY) and Ayanna Pressley (MA) standing together with Ilhan Omar (MN) at a press conference Monday, Omar says, “It is time for us to impeach this President.”

Though he did not mention any of them by name, Trump on Sunday published a series of tweets attacking the congresswomen, telling them they should “go back” to the countries that they came from and criticizing the Democratic party for condoning their “disgraceful behavior”.

On Monday, Trump doubled down on the criticism, calling on the congresswomen to apologize to the US, to Israel, and to the “office of the presidency”.

“When will the Radical Left Congresswomen apologize to our Country, the people of Israel and even to the Office of the President, for the foul language they have used, and the terrible things they have said,” Trump tweeted. “So many people are angry at them & their horrible & disgusting actions!”

“If Democrats want to unite around the foul language & racist hatred spewed from the mouths and actions of these very unpopular & unrepresentative Congresswomen, it will be interesting to see how it plays out. I can tell you that they have made Israel feel abandoned by the U.S.”

Later at Monday’s press conference, Pressley called Trump’s attacks a “disruptive distraction” and urged people not to “take the bait.”

“He does not embody the grace, the empathy, the compassion, the integrity that that office requires and that the American people deserve. That being said, I encourage the American people and all of us in this room and beyond to not take the bait. This is a disruptive distraction from the issues of care, concern, and consequence to the American people,” she said.

Pressley defiantly added, “We will not be silenced” while calling the President “the occupant of the White House” and saying, “I will always, refer to him as the occupant as he is only occupying space.”

Omar, meanwhile, accused Trump of “launching a blatantly racist attack on four duly elected members” of the US House of Representatives, pointing out that they are all women of color.

“This is the agenda of white nationalists. Whether it is happening in chat rooms, or it is happening on national TV, and now it’s reached the White House garden,” Omar said before calling for Trump’s impeachment.

Trump then responded to the congresswomen’s remarks in a series of tweets.

“We will never be a Socialist or Communist Country. IF YOU ARE NOT HAPPY HERE, YOU CAN LEAVE! It is your choice, and your choice alone. This is about love for America. Certain people HATE our Country. They are anti-Israel, pro Al-Qaeda, and comment on the 9/11 attack, ‘some people did something.’ Radical Left Democrats want Open Borders, which means drugs, crime, human trafficking, and much more,” he wrote.

“Detention facilities are not Concentration Camps! America has never been stronger than it is now – rebuilt Military, highest Stock Market EVER, lowest unemployment and more people working than ever before. Keep America Great!” he added.

….Detention facilities are not Concentration Camps! America has never been stronger than it is now – rebuilt Military, highest Stock Market EVER, lowest unemployment and more people working than ever before. Keep America Great!

Ocasio-Cortez has come under fire after saying the United States operated “concentration camps” on its southern border, she previously said that cutting military and economic aid to Israel as a way to signal opposition to Israeli policies should be “on the table.”

Omar was criticized after she suggested on Twitter that Republicans were attacking her at the behest of the pro-Israel lobby AIPAC. She subsequently issued a half-hearted apology before ultimately deleting the controversial tweets.

Tlaib claimed in an interview in May that Palestinian Arabs living in the British Mandate prior to the establishment of the State of Israel “provided” a safe haven to Jews after the Holocaust.

She has also backed BDS and, when asked in a past television interview whether she would vote against military aid to Israel when she goes to Congress, replied “absolutely.”

As soon as Donald Trump won the election, Democrats branded him an antisemite, so of course he’ll never move the U.S Embassy to Jerusalem as he promised. For over a year, they branded him a racist & antisemite.

But he isn’t. As president, he has been proven to be Israel’s greatest ‘friend’ of all U.S. presidents. Because of his desire to secure the US’s Southern border, the focus is now turned on calling him a ‘racist.’

Coincidentally, black Americans are seeing that President Trump has quietly done more for the ‘black community’ in 3 years, i.e. prison release, lowest unemployment ever, long awaited pay raises, urban development and curtailing drug availability, than his black predecessor did in 8 years. – BTW… he did this while being attacked every single day!

This anti-Israel, pro-Hamas squad of 4 Dem. Representatives will continue to label President Trump a racist, even if untrue…because calling him an antisemite just didn’t pan out.