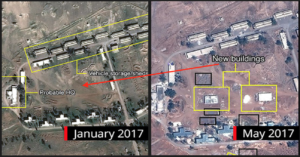 Iran has gained another foothold in Syria by establishing a permanent military base outside Damascus, according to a report by Fox News, despite Prime Minister Benjamin Netanyahu’s repeated warnings that Israel will not allow any Iranian military entrenchment in the war-torn country.Western intelligence officials, the report says, say that the base contains hangars used to stockpile missiles “capable of hitting all of Israel.”

Satellite pictures taken by ImageSat International show what appears to be a new Iranian base located approximately 12 kilometers northwest of Damascus which is believed to be operated by the Quds Force—the special operations arm of Tehran’s Islamic Revolutionary Guard Corps (IRGC).

In the pictures, white 18 by 27 meter white hangars for storing short and medium-range missiles can be seen.

The base is similar to that which was established by the Iranians south of the Syrian capital and that was destroyed, according to foreign reports, by Israel last December.

Hangers on Iranian base in Syria – Photo: ImageSat International/Fox News

Gen. Joseph L. Votel, head of US Central Commander warned on Tuesday that Iran was “increasing” the number and “quality” of its ballistic missiles it was deploying to the region.

Speaking at the Munich Security Conference earlier this month, Netanyahu told European diplomats and leaders that “Israel will not allow the regime to put a noose of terror around our neck.,” threatening to strike Iran directly if forced to.

“We will act if necessary not just against Iran’s proxies but against Iran itself,” he said, listing the threats that Tehran poses to Israel and the world.

Last week, a New York Times investigative report revealed the scope and depth of Iranian entrenchment in Syria. Iran, through its presence in Syria, was “redrawing the strategic map of the region,” as per the paper.

The report detailed Iranian bases and posts inside Syria, presenting a high concentration of Iranian outposts along the border with Israel.

The red squares on the map above represent administrative bases, logistical bases, control centers for UAVs (drones), training centers and more. The map does not, however, include temporary bases established near zones of conflict.