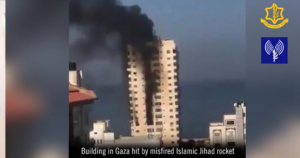 Yingst, reporting from Gaza, said the building was hit by a rocket that misfired from Gaza, and that he witnessed the event.

“Israel did not strike this building. A rocket misfired from Gaza.I was across the street when it happened,” wrote Yingst on Twitter.

Yingst responded to a post uploaded yesterday by Amnesty International:

“We strongly condemn attack on the Palestinian Independent Commission for Human Rights whose office in Gaza was struck by an Israeli missile earlier this morning. Strikes targeting civilian buildings is a violation of international law. We are sending our solidarity to @ICHR_Pal.”

Amnesty International is frequently accused of having an anti-Israel bias and whitewashing the war crimes of Palestinian Arabs.

“Rather than condemning genocidal terrorists who work day and night to murder Jews, Amnesty International opts to condemn Israel, the only democracy in the Middle East,” said Peleg.

“This depraved so-called human rights organization should be ashamed of spreading blood libels about Israel and siding with terrorists.”