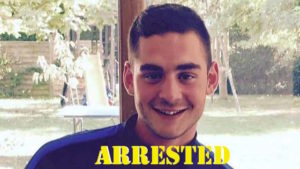 Two employees of the French Consulate in east Jerusalem—a driver and his security guard—were arrested by Israeli authorities last month on suspicion of using a vehicle with diplomatic plates to smuggle weapons from Hamas in Gaza to the West Bank, the Shin Bet said Monday.

The consulate’s driver, Romain Franck, a French national, is suspected of using his diplomatic vehicle to transport some 70 handguns and two assault rifles.

The vehicle used by the French driver to transport the weapons – Photo: Shin Bet

A Palestinian guard employed by French authorities, a resident of east Jerusalem, was also arrested in the case, as well as several Palestinians from the Gaza Strip who were staying in the West Bank illegally.

Franck was part of a Palestinian network in the Gaza Strip, the West Bank and east Jerusalem that smuggled weapons from Gaza to the West Bank through the Erez border crossing.

The French driver smuggled arms on several occasions over the past few months, while taking advantage of his diplomatic vehicle, which was subject to less stringent security checks at the crossing.

Franck received the weapons from a Palestinian resident of Gaza who works for the “French culture center” in the strip. Franck then took the arms to a Palestinian man in the West Bank, who in turn sold them to arms dealers.

The investigation found that Franck had a financial motive and was acting of his own volition and unbeknown to his superiors. The investigation also found that several of the Palestinians arrested in the case were also involved in the smuggling of money from Gaza to the West Bank.

The investigation was carried out in coordination with the Israeli Foreign Ministry and while keeping French authorities constantly updated.

A total of nine suspects have been arrested in the case so far. Indictments will be filed against six of them on Monday.

The French embassy in Israel said on Monday it was cooperating with Israel in the investigation. “We take very seriously this case … and we work very closely with the Israeli authorities on this matter,” said an embassy spokesman, who declined to comment further on the allegations against the staffer, a French citizen.

According to his Facebook page, Franck, who is from Lambersart in the north of France, arrived in Jerusalem in January 2017. “It’s the big day, starting to a new adventure.. Thank you for everything that accompanied me and supported in this new experience that begins!” he wrote at the time.

Later he posted many photos from the region, including from Petra and Aqaba in Jordan, the Palestinian Authority and the Jordan Valley.

An Israeli official called the incident “very grave,” but clarified it would not affect Israel’s ties with France. “We thank French authorities for the cooperation,” he said.

A senior Shin Bet official decried the “cynical exploitation of the immunity and privileges granted to foreign representatives in Israel to smuggle weapons… that could be used in terror attacks against Israeli citizens and security forces.”

The Coordinator of Government Activities in the Territories, Maj. Gen. Yoav Mordechai, also slammed the “cynical and never-ending exploitation of humanitarian aid and international aid by the terrorist infrastructure.”

“This event only clarifies the need for a strict policy on granting (entry) permits,” he continued. “International bodies are required to carry out internal inspections to ensure aid goes to the residents of Gaza and not to terror.”

French lawmaker Meyer Habib, who represents French nationals living in Israel, the West Bank and Gaza, said, “Unfortunately, this isn’t the first problematic affair the French Consulate in Jerusalem has been involved in. And even if only junior staff were involved, there is a feeling, unfortunately, that the consulate has actually become the French Embassy to the Palestinian Authority.”