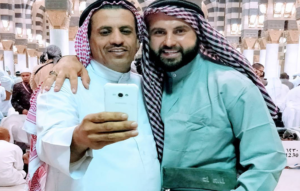 Posting a hosts of selfies to Facebook and Instagram showing the Israeli Jewish blogger living it up in the Islamic Kingdom, while wearing a kefiyah, is causing an uproar in Saudi Arabia.

An Israeli Jewish blogger recently did what few others would dare by traveling (presumably on a foreign passport) to Saudi Arabia.

But Ben Tzion didn’t only go to Saudi Arabia, he let everyone know about it, in rather epic fashion, via Facebook.

Ben Tzion posted a number of selfies with both local officials and average Saudis.

In all of the shots, he was wearing an Arab headdress, or kefiyah, which along with his beard was the perfect disguise. But in one particular shot, Ben Tzion donned a very different kind of kefiyah featuring the Star of David!

What really got Arab Muslims on social media riled up, though, was when Ben Tzion visited Islam’s second holiest mosque in the city of Medinah.

The photo from inside the mosque was clearly taken by a third party, who apparently didn’t have a problem with Ben Tzion very conspicuously pointing out the Jewish prayer shawl tucked under his arm.